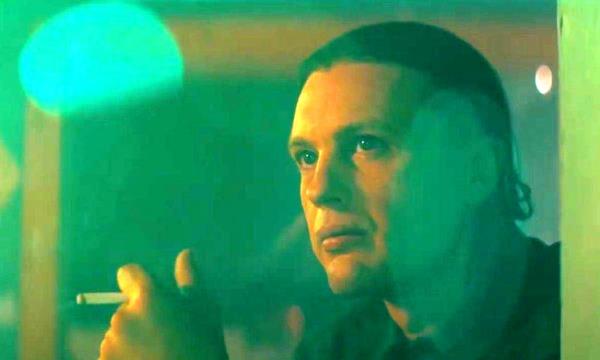 Michael Carmen Pitt in Run with the Hunted.

Night of the Hunted

We’ve been watching the long, winding road that actor Michael Pitt (he’s been going by his full name, Michael Carmen Pitt for the last few years, starting with the film Ghost in the Shell) has been following. The one thing that is most notable about his career is that he almost never has done what was expected of him.

He came up in the ranks from the theater world, a smart handsome kid who was fascinated by extreme personalities. Therefore, instead of playing the lighter, romantic roles, he took on damaged characters, many of whom got dragged early – or went voluntarily – into crime.

He has taken this on in early roles like the Leopold-and-Loeb-inspired teen in the film Murder by Numbers (in which he was teamed with a then-also-unknown Ryan Gosling). He was also memorable in the creepy Euro thriller Funny Games. He was even as the focus of the first season of the acclaimed HBO series Boardwalk Empire with Steve Buscemi (spoiler alert: his character was killed at the end of the first season.)

Pitt has made a point of trying to find the nuance and defining qualities in some very bad men – or perhaps sometimes good men who fell into very bad circumstances.

This type of storyline also defines his latest film, Run with the Hunted. In the film by writer/director John Swab, Pitt plays Oscar, a young man who fell in as a child on the run from the law with an Oliver Twist-esque band of young thieves, all watched over by a ruthless criminal named Birdie (Ron Perlman).

Oscar grows up with another wild child, Peaches (Dree Hemingway), and eventually they become the leaders of the juvenile gang. However, when the two grown-up children he saved from their abusive father as a twelve-year-old show up back in his life, Oscar starts to question whether he has made the right choices in his life.

A week before the premiere of Run with the Hunted, we caught up with Pitt to discuss the film.

What was it about this screenplay which intrigued you?

The story I felt was an interesting story, because I thought it was current, and also timeless. The writer/director John [Swab] I thought was very open to suggesting things, to his actors. I think that’s very wise for a young director, given all the obstacles they are forced to overcome. I had met with John and then I had met with [co-star] Dree Hemingway. Yeah, that’s really what attracted me to making it.

In what ways did you relate to Oscar?

Honestly, I related to him in some ways. I was a young kid who was on his own very young, having to figure out a path for himself. I related to that.

Michael Carmen Pitt in Run with the Hunted.

What parts of his character were more difficult for you to get ahold of as an actor?

I don’t want to tell you this… oh, I’m just going to tell you. The hardest part was that we were working very quickly, very last minute, so I didn’t have a lot of time to prep. Changing things to make it better, which we did. There wasn’t a lot of prep time for me and I was really trying to keep the New York out of my accent. And I didn’t exactly do that to my expectations. Especially if there aren’t specific lines, to memorize or you don’t have time to memorize the lines because it’s written the day before, and when you’re improvising, you really need to know your accent so that you don’t make mistakes. I would have liked a little bit more time because I can hear it comes out a few times. That bothers me.

Throughout your career, a lot of your bigger roles, like in this and Funny Games and Murder by Numbers and even Boardwalk Empire, are about young men who get involved in crime. Why do you find that situation interesting as an actor?

I guess every time you find something that interests you with the character you want to portray. I don’t really look at it that way. I started working professionally I guess at 19, here in New York, doing theater. When I started to get into making films, I was very adamant about not being exploited as a teen heartthrob. I think throughout my career you can see that those are very specific decisions. A way of doing that, since you brought up Murder by Numbers, was playing these more intense characters. It was definitely a way of really shaping where I wanted to go, what I was interested in. What challenged me. A lot of those characters were pretty intense, but that’s why I picked them. It’s not really something I look for in a character. I actually, to be honest, look for it less now than I would then.

One little subtext in this film which I found fascinating was the script’s – and your character’s – interest in literature. Much of the first half felt like a modern version of Oliver Twist, you refer to your band as The Lost Boys which is from Peter Pan, Oscar and Peaches discuss Rumblefish. Even the movie’s title is taken from Charles Bukowski. As an actor, did you make this connection, and did it influence the way you played Oscar?

That was something I brought into it that John was very open to. But you’re missing the best one, which is The Grapes of Wrath.

Yes, in the last part…

… at the end…. Actually, maybe… yeah, now I can’t even remember if they give you that information in the film. I’m not sure if we shot the title. At the end of the film one of the boys reads The Grapes of Wrath. Because we were shooting in Oklahoma, it was something that just for me I would read that book at night. Also, Rumblefish. I felt like they gave me something within the character. I didn’t grow up in Oklahoma.

Sam Quartin and Michael Carmen Pitt in Run with the Hunted.

Well, like you said, Run with the Hunted was filmed in Tulsa, a city that is not all that well known as a film location and has been in the news this weekend [because of a controversial Trump rally]. What was Tulsa like to work in and what do you feel it adds to the movie?

I think now you can buy it, but you used to have to go to the museum to view [the photos].

Mitchell Paulsen was terrific. Obviously, you had no scenes with him because you were playing the same role at different times in his life, but did you ever get to discuss the character with him, maybe come up with a through-line for the character from his age to your own?

Ron Perlman is always such an interesting actor. Most of the time he seems so reasonable and even sort of kind, but there is a hardness to him that you know you don’t want to screw around with him. What was he like to work with?

He was a joy in the little time I did get to hang with him. (deadpans) He was like, “Listen, don’t talk to me. Don’t look at me. You can address my assistant, not me.” That was a little weird. (laughs) That was a big joke. These are the jokes, folks. I’m here all night. Be sure to tip the waitress.

I’ll get the veal…

Tough room! (laughs again) I mean, no, Ron was, he’s a seasoned guy. It was just be prepared and let him do what he’s going to do. Be there. Yeah, I don’t know what else I can say. He’s great. It was extremely easy to work with him. 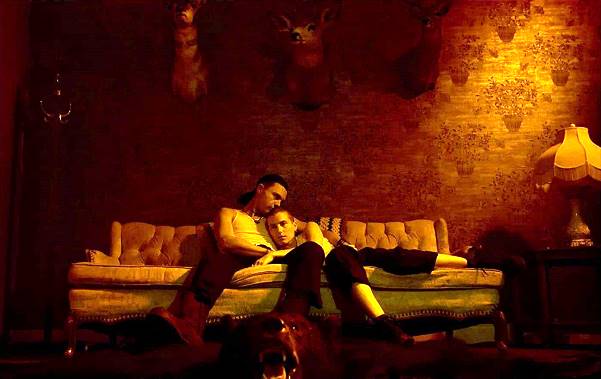 Michael Carmen Pitt and Dree Hemingway in Run with the Hunted.

This is only the second time I’ve seen Dree act, though I was always a big fan of her mother’s work [Mariel Hemingway]. She was terrific in playing such a damaged soul. How is she as a scene partner?

She was great. She was great. I love Dree. I think we’re going to see a lot of great work out of her. She did an amazing job, and that’s not an easy character to play. I think her performance is great. She had a lot to do with me coming on to the film. When I met Dree, I said I would do it.

In a lot of ways, Oscar did not seem to be happy with his life of crime. If he had not had to protect Loux and Amos as a child, where do you think he would end up?

Well, I guess that’s maybe some of the unhappiness that you’ve picked up on. I mean, who knows? I don’t think he knows. He probably feels in a lot of ways that choices were made for him. If everyone were held accountable for choices they made when they were 12, their lives would be dramatically different. That’s probably hard to deal with.

How have you been dealing with the whole shelter in place world?

Oh, probably like everyone in the world right now. What the hell’s going on? What do I do? How can I help? Can I help? What is our future? I feel probably every emotion you feel, and everyone else. It’s… an interesting time. An interesting time. It’s a time for people to be wise. Use their knowledge to make this a better place.