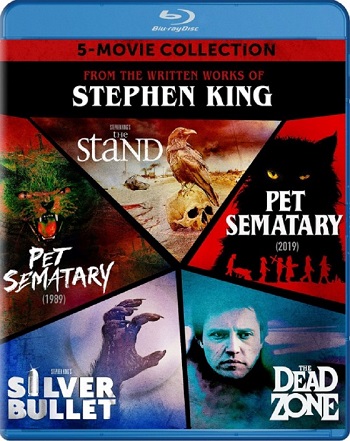 Not only is Stephen King insanely prolific as a novelist – he has currently written over 60 published novels, as well as many novellas, short stories, non-fiction books, serial novels, screenplays, teleplays, theatrical plays, musicals, articles, etc., in a career of under 50 years – he may be the writer who has inspired the most film and television adaptations. There are well over 80 movies based on his work, and that isn’t even counting the TV and stage adaptations.

With this kind of sheer bulk of product, of course the quality of his films is going to be wildly inconsistent. While King’s writings have inspired some classic films (like Stand by Me, It and The Shining), it has also been the source of some insanely awful films (Maximum Overdrive, The Children of the Corn or Dreamcatcher, anyone?)

Therefore, this new collection of five films (well actually four films and one miniseries) based on three King novels and one novella (one of the novels is represented by two different film versions) could land anywhere over the map of quality. Pleasantly, this grouping has more good than bad to offer.

The Stand: This is the motherlode in this collection, however it should be pointed out that despite the title of this collection, The Stand is not a movie. It is a four-part, over-six-hour long 1994 television mini-series based on King’s longest novel (and that is saying something for a man whose shorter novels often flirt with 1,000 pages!).

That leads to certain positives, and certain negatives. On the plus side, this film can luxuriate in its complicated plot and a deep understanding of its multiple characters. On the negative, because this was made for network TV – thirty years ago when these things were policed even more – some of the shocks and scares are tamer than they may have been in a movie. Not that The Stand isn’t scary as hell, but at least some of those scares are implied more than shown.

Preparing for the upcoming CBS All Access reboot of this story (again as a miniseries), it is a great time to revisit this landmark miniseries. In certain ways, The Stand is all too topical in the current pandemic, however King himself has come out to comfort people, explaining his mythical disease “Captain Trips” is much, much more virulent and deadly than COVID-19. (Which is not to say that COVID should not be taken very seriously…)

Because The Stand is – quite simply – about the end of the world as we know it. And, honestly, it may be the best post-apocalyptic story ever. (In full disclosure, in general I’m not a big fan of dystopian movies.) The Stand takes a look as a near-future US where a ravenous disease has killed more than 99% of the human race. Now, in a new world full of rotting corpses, without electricity and plumbing, the few survivors start having mystical dreams. Some dream of an elderly African American woman who is by a cornfield. Others dream of “The Dark Man,” an evil force.

The dreams lead the people to two destinations. The good people end up in Boulder, Colorado, the evil in Las Vegas. This sets up the ultimate war between light and dark and a pitched battle for surviving humanity’s soul.

Pet Sematary (1989): Called out by the author himself as the most disturbing story he ever wrote – to the point where he is not sure he should have ever released the novel – Pet Sematary has some significantly scary ideas. While I don’t quite agree with King’s assessment of the book – both on the fact that it was the most disturbing book he has written and the fact that maybe he would have been better off letting the manuscript rot in a drawer – it was an undeniably spooky book. And it has led to two movies – made 30 years apart from each other – which frame the story in different ways, but both times touch on something primal for humans.

The 1989 film directed by Mary Lambert is somewhat more faithful to the source material – no big shock since King wrote the screenplay – and has become something of a fright classic over the years, even though it was a box-office disappointment on its original release.

The story is as simple as it is shocking. A young couple with two small children buys a new house in a secluded area of Maine. It turns out that it is right nearby a local pet cemetery which was built right next to a sacred Indian burial place. The locals know that there is a legend that if your pet were to die, if you bring it to the pet cemetery and bury it on the sacred ground, the pet will come back to life. Of course, it is against the course of nature, and when the pet returns it is normally angry and violent.

However, the film asks, if this questionable possibility of returning a beloved pet to life is so hard to resist that people would ignore their beloved pet’s complete change in attitude, what would happen if the sacred burial ground were used on a human being?

Pet Sematary (2019): By far the newest title in this collection, the 2019 reboot of Pet Sematary is both faithful to the source material and experiments with it. There is one massive and very basic change to the storyline. However, the new film does not mess with the atmosphere of the story. The alteration even makes a certain amount of sense as far as straight narrative goes. It actually leads into an ending that is – if possible – even more disturbing than the original film’s closing shot.

I do have to say this, though, the new movie version of Pet Sematary is spooky as hell. I mean it, it’s one of the most chilling horror films I’ve seen in a long time. And while it takes some different paths than the original film, in many ways the newer version is even better than the first one.

Not to mention that John Lithgow, in the flashiest role of an older local who knows where all the bodies are buried – literally – does the near impossible by making his character every bit as intriguing as the late great Fred Gwynne did in the original.

The Dead Zone: This eerily prophetic film – tangentially about an amoral populist politician gaining popularity in a political race even though he doesn’t have the aptitude nor the empathy to govern properly (sound familiar???) – is one of the mostly overlooked jewels in the King’s crown, both as a novel and as a film adaptation. It was the first mainstream film by indie darling David Cronenberg (hot off the heels of his cult favorites Scanners and Videodrome). It offers a rare leading role to Christopher Walken. The evil politician is played by the wonderfully unhinged Martin Sheen (years before he soothed our country in The West Wing). And the evil politician finally went too far for even his staunchest supporters, which is kind of comforting in this political era.

Of course, the politician and his story are only a small part of this movie – in fact, he does not appear until well into the second half of the film. This is really the story of Walken’s Johnny Smith (the generic name is completely intended), a high school teacher who has a car crash and is in a coma for five years. When he awakens, he has lost his job, he has lost his fiancée and he has gotten an unwelcome psychic power: when he touches the hand of another person, he sometimes sees their future.

It is an intriguing and slightly tragic storyline, in which right and wrong get debated, thrown in a mixer and come out with no clear answers. The ending is one of King’s best, both tragic and strangely hopeful.

Silver Bullet: This 1985 werewolf thriller is the weak link in the collection. It is not Children of the Corn-level horrible, but it’s certainly not very good either. Unlike the other films collected here, Silver Bullet was not based on an actual King novel. It was based on a limited-release novella – and at 129 pages, including illustrations, a rather short one by King standards – called “Cycle of the Werewolf.” Now being based on a novella is certainly not necessarily a bad thing in King films, three of his best, most timeless movies were based on novellas – Stand By Me (which was based on a novella called “The Body”), The Mist and The Shawshank Redemption (based on the novella “Rita Hayworth and the Shawshank Redemption”).

However, “Cycle of the Werewolf” was not on those story’s level of craft, and the movie based upon it also falls well short.