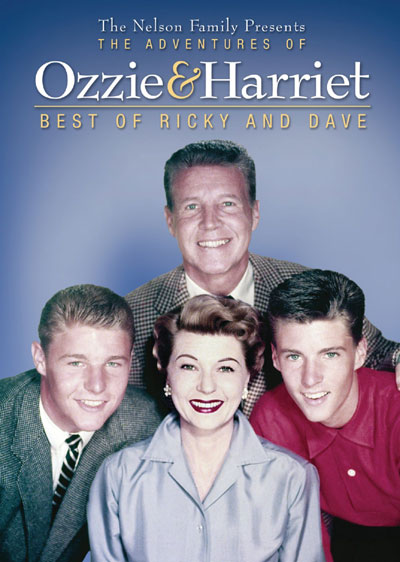 The Adventures of Ozzie and Harriet: Best of Ricky and Dave

The Adventures of Ozzie and Harriet

Bafflingly, America has yet to have it up to here with reality programming. We can argue until the Survivors come home about “what is reality?” but the genre is entering its second decade, and there seems to be no happy ending in sight.

We deny it, but we like to watch people who have cameras on them. We need to believe that what we are seeing is unscripted and spontaneous. Of course, deep down we know that real reality is too much for us. We can’t handle the truth, and why should we? So we watch and get a charge out of our watching. We tell ourselves that this unreal reality is good enough for us.

If you’re one of these puzzling people who revel in being a voyeur, and you know you are, then you may enjoy screening old-school reality with The Adventures of Ozzie and Harriet: Best of Ricky and Dave.

These are hand-picked episodes from the classic and eternal sitcom about a real-life family and their “problems.” The Nelsons were actually The Nelsons. In their bland, quiet way, they super-connected with this country for over two decades, for reasons both simple and complex.

They were “just like us,” and yet they were also far removed from anything we could imagine. Reality never felt so fragmented and refracted.

The Adventures are hardly that: a piece of pie, a lawn mowed, some mild dating, innocuous flirting, and general, good-natured befuddlement. The package is less than whimsical and slightly more than hijinks. Throughout, the Nelsons retain their dignity. They don’t stoop to physical comedy. The experience is one of watching talking heads, pretty ones. But it’s meant to feel real, and somehow it does.

We have been trained to believe that this is just what the fifties and its populants were like, and we are asked to smugly look down upon it. Yet the power of Ozzie and Harriet will compel you.

The series became a pop-culture main ingredient, first on radio and then on television, from the earliest days of the medium up until the dawn of the age of flower power. It has remained in public consciousness ever since, both for better and for worse.

In this DVD collection, the emphasis is on the episodes featuring Ozzie and Harriet’s children, David and Rick. Through circumstance that only happens on television, the boys actually grow up to be amazingly telegenic, if not amazing, actors. Reality seeps in as we see the pancake makeup heaped on their faces to hide their blemishes during adolescence. Talk about reality – they literally grow up before our eyes.

All the while, their surroundings stay somewhat static, filled with pristine, generic, ultra-sanitary living rooms and college campuses. This world will eventually disappear forever and never come back, and yet there is a hint of familiarity and comfort about the Nelsons and the insular space they inhabit.

We see the boys attending high school (the malt shop), then college (the frat house), and then marrying at an absurdly young age and enjoying a marital bliss only seen in sitcoms. There are also a few choice episodes of the boys as children, and their slight unease in front of the camera gives the series an even more appealing sense of unreal reality.

The show has taken its lumps over the decades. It is often used as a strong example of the artificiality of early television and the superficial portrayal of the American family. That’s wrong. Whether your state is blue or red, the Nelsons subtly and successfully capture the power of love, the art of communication, and the reward of familial bonding, even if Ozzie is freaky enough to lounge around the house on a Saturday in a suit and tie. And we never find out what he does for a living, in order to afford that expansive piece of suburbia.

But give them a break. The Adventures of Ozzie and Harriet , unfairly, was the lightning rod for every bad rap from fifties repression to lame sitcom plots to unattainable standards for living the American Dream. Hogwash. This family is real in a way that the Osbornes and the Kardashians (and the Lohans, for that matter) could never achieve. What they were and what their TV descendants were not were themselves. They were affable, gentle, chill and almost Zen in their boringness.

The show never showed off. Ozzie would say something funny and chuckle to himself. Whatever was said was usually funnier to him than it was to us. He stuffs cotton in his ears when the boys are listening to the most benign of rock-and-roll records. As well, Ozzie and Harriet sleep in a single bed as early as 1961, which is more than Rob and Laura from The Dick Van Dyke Show can claim.

Harriet would ask Ricky, “You’re not going to the dance dressed like that, are you?” and it was meant as it was delivered: vaguely identifiable for both parents and children, and therefore mildly funny. That’s as outrageous as it gets, except for David once calling his brother a double-crosser.

In almost two decades, you won’t find as much as a belly laugh here. This is what is known as a gentle comedy. You’ll be lucky if you even muster a half-smile (even Ricky smiles only about twice during the whole run of the series). But think: do you really need to be smiling and laughing to truly enjoy television? That’s not reality.

In almost every episode, there is more situation than comedy, but that’s only because it’s all so low key. And there’s nothing wrong with that. Why must every series insist on showboating in your face? Get back to reality.

In fact, at the beginning of each show, the announcer says, “Here they are, America’s favorite family, the Nelsons.” We never should have let them go. We see them stand stiffly before the camera, all of them impossibly good looking and seemingly one dimensional.

The announcer continues, “Here’s Ozzie…here’s Harriet…” Duh! But these people are a more appealing version of your kind, decent neighbors, showing you their home movies. You watch politely, and if you let yourself, you can really get into it.

The DVD also offers samplings of radio programs, the announcer telling us with confidence that Ozzie and Harriet are “young America’s favorite couple.”   In fact, in the very early days, they created separate episodes just for radio. That’s how favorite they were.

The perennial image we have of the Nelsons has been forced upon us by harsh critics. Most of us don’t remember (and you’ll see it here) that Harriet once kicked Ozzie in the shins and Ozzie patted a female neighbor on the ass. In a later episode, newly married son David describes a teenage neighbor as a “Lolita.” Just like with The Brady Bunch, the world remembers them incorrectly. It was not all love and understanding. It was simply mostly all love and understanding.

So is this archaic? Do we no longer like to watch happy families who are civil to each other and just slightly above boring? Sure, we see not a hair out of place (rest assured: Harriet’s do makes a successful transition from the fifties to the sixties) and the house looks strangely unlived in. Harriet, for bearing two children, has a three-inch waist.   And again, it only bugs us that Ozzie doesn’t seem to have a job only if we let it.

Not surprisingly, Rick Nelson became the breakout star of the series, much like Kramer and the Fonz and Vinnie Barbarino, but with only an ounce of the same charm and acting talent. In real life, he was one of the first rock-and-roll superstars, second only to Elvis. Natch, with the help of his business-savvy father, his popularity was used in a direct-marketing kind of way, to sell records and to sell Rick himself. He would sing his swingin’ numbers (”

“) to fill up the half-hour when the plot was a bit too thin (which was most episodes). Yet it never felt like overkill. In most every case, he was singing at a neighborhood house party, never as a “star.” Never was he portrayed as what he was: a musical phenom. That’s just goes to show how real they kept the show. And when Ricky dates Tuesday Weld in one amazing episode, the two of them on one screen are so gorgeous that your DVD may get stuck.

Out of familial loyalty, Ricky stayed with the show long after the hits stopped coming. By the time the series finally bit the dust, in 1966, the times, they were a-changin’.  The Nelsons would live on in reruns, forever carrying the burden of being prototypes. But who said proto is bad?

Take a look again – or even for the first time – and give them a real chance.