She is going… and she’s planning on going far.

Growing up in New York, Stefani Gabriella Germanotta – who now goes by the stage name Lady Gaga – was steeped in the celeb culture, watching famous classmates going to all the best parties and dodging paparazzi.

Wanting a little of that glamour herself, Gaga threw herself into music – a giddy marriage of dance club beats and rock attitude.  She was accepted at the Tisch School of Arts at NYU at only 17 – though she eventually dropped out.  Gaga started out at open mike nights at places like the famed Village club The Bitter End, and quickly grew a buzz on the scene, soon becoming an underground fave of the Manhattan nightlife.

The buzz got so hot that Gaga soon was a desired songwriter-for-hire, penning tunes for The Pussycat Dolls, New Kids on the Block and the upcoming Britney Spears CD.

She was just as quickly signed to the label of popular rapper Akon (with whom Gaga has also written).  The first fruits of her efforts is The Fame – a dance concept album about the search for notoriety.  With an intoxicating mix of old-school beats and surprising glam rock tendencies she creates a glorious gumbo of sound with touches of Bowie, Jackson, C&C Music Factory, Madonna and Gwen.

About a week before The Fame was to be released, Gaga sat down with us to talk about her music and her obsession with the glamorous life.

I read in a bio of yours that you went to a private school at a convent.

Yeah.  I went to the Convent of Sacred Heart, a private school in New York.

That isn’t the background one would picture when listening to your music.  Do you think that experience affected your musical style and image?

Well, I think that actually it does kind of fit.  In a way, from a sound perspective….  My sound is very forward-thinking and underground.  It’s pop, but it’s futuristic and artistic.  But the subject matter is the fame.  There were a lot of girls that were in the public eye that went to my school, so I was surrounded by it.  I was sort of like a nerdy theater kid.  So, if anything, I disagree a little bit.  I consider myself to make pop art music.  Even though it might not sound like it came out of a convent, I think my education growing up in that environment made me able to write about a decidedly shallow concept in a really intelligent way.

You have an unusual stage name.  I had read it was a reference to Queen’s “Radio GaGa.”  Is that true?

Yeah, it is.  It was a nickname my producer has for me.

You were originally signed as a songwriter.  You have written songs for the likes of the Pussycat Dolls, New Kids on the Block and now for Britney Spears.

I love it.  It’s so much fun… and a total privilege.

As a performer, is it a little weird to see other people recording your songs?

“Just Dance” has became something of a hit.  How surreal was it when you started showing up on radio and TV and stuff?

It’s crazy.  It’s awesome, it’s fun… but do you know what’s so interesting?  Because I’ve been doing this so long, it feels like it’s time.

One of the great things about The Fame is that it has lots of different styles mixed in – R&B, dance like “Paparazzi,” hip hop like “Poker Face,” glam rock like “Again, Again,” ballads like “Eh, Eh.”  Were you looking to experiment with styles when recording it or is that something that comes naturally to you?

Thank you.  It really comes naturally to me.  I did the record over a period of a few years, so I just changed and I grew.  When it came time to put all the songs on the record, I felt like I had a lot of hits, but they all came from different parts of my life.  I thought, why limit myself to just putting all synth-electro-pop records on here?  Let me give everybody a real record.  A real body of work. 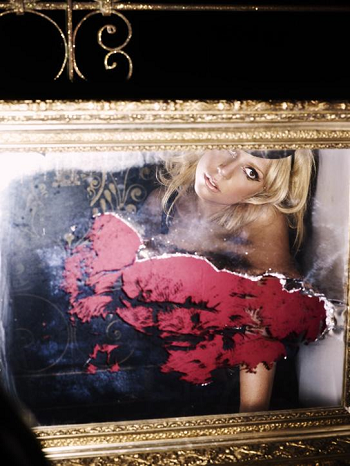 Many of the songs – such as “The Fame,” “Beautiful Dirty Rich” and “Paparazzi” are about the glamorous life.  Why does that intrigue you?

What it’s really touching on is this idea of fame and how it affects us as a culture.  I’m 22 years old.  I’ve been writing this record since I was nineteen.  For me, that’s a big part of my culture – my club culture.  Celebrity life.  It’s the media and it’s the tabloids and it’s 23-year-old blondes getting arrested.  Why is this happening?  Why do we love it?  Why are we slipping money into it?  I was fascinated with it and I decided to write songs about it.  In a way, I thought that it was the most relevant issue for me to speak to, that could really make an impact on young people.

Another recurring theme is hooking up in “Boys Boys Boys” and “Summerboys.”  Why do you think that a song about meeting people and picking them up in clubs sort of resonates?

It’s because it’s about sex.  Everybody wants to hear about sex.  That’s what all music is really about.

I was reading that “Beautiful, Dirty, Rich” was going to be used for the series Dirty Sexy Money.  You’ve also had a couple of songs recently on Gossip Girl.  Do you think television has become as important as radio to get music out there?

Oh sure.  I just got on the radio in the past couple of weeks.  We’re just starting to break at radio now.  It’s been a really long road.  Television stuff is not easy to get placed on, either.  That’s more artistic than anything, because you are putting the music with imagery.  But, like I said, my music really speaks to the modern culture.  We’ve been really lucky.  I’ve had more than half the album licensed to television and movies.

Nowadays musicians have so many more ways to reach out to their fans, the forum on the official site, your MySpace page.  What is it like being able to reach the fans like that?

I hear you are going to be touring with New Kids on the Block.  The CD is very good but it has a very well-produced studio sound.  Will it be tough to replicate in concert?

No, it’s not difficult to do it.  And it looks amazing!  The show has super-innovative technology and fashion and choreography.  It’s really unlike anything you’ve ever seen before.  That’s my passion.

I heard you performed at the Lollapalooza Festival last year.  What was that like?

I wrote every song on the album.

We have a big election going on this year.  Are you getting involved?

How so?  Are you doing benefits or anything?

What’s your favorite movie or book?

Moonstruck is my favorite movie.  My favorite book is Letters to a Young Poet by Rainer Maria Rilke.

In the end, how would you like people to see your music?

Radio playlists are so regimented these days.  You used to be able to hear rock, pop, country and soul on the same station and that just doesn’t happen anymore.  Do you think that can make it tougher for a band to find an audience?

I think that with radio formats it can be difficult, but I played a show the other night in San Francisco, for a gay club.  When I got there, the club was packed and there were lines around the block – thousands of people that couldn’t get in.  When I went inside, it wasn’t just a gay crowd.  It was straight guys, gay guys, straight women, gay girls.  It was black guys, white guys.  Black women, white women.  Asian community.  Latino community.  Everybody.  I was like, I’m bridging gaps.  My music is reaching all different kinds of people.  Even on a gay night, everybody shows up.  Today – actually, it’s so funny you asked this – because today I got added to Z-100, which is like the biggest station in the country.  It’s been such a long road.  It’s been such a hustle to get this record played on the radio, because it’s so different.  But it’s a hit record, and a hit record breaks all the rules.  I was never going to give up on it and I still won’t.  I think at the end of the day, regardless of radio formats and regardless of genre, I think that a hit record breaks every rule.