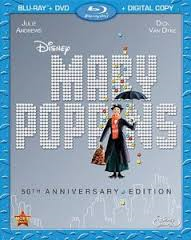 As the story of the making of the film about the beloved Disney nanny is coming to theaters soon in the Tom Hanks film Saving Mr. Banks and the musical is still packing them in on Broadway, it’s time (yet again) to herald the return of Mary Poppins‘ best-known incarnation.

Mary Poppins came out in a time of artistic and social upheaval.  Beatlemania and the hippie movement were just breaking out, the world was still mourning the assassination of John F. Kennedy and the Vietnam War was becoming a source of strife on the home front as well as in the field.

However, as much as the world was changing, there is nothing cutting edge about the plot of Mary Poppins.  In fact, it was a love letter to good old England, the ideals and lifestyles which were just a hair away from being completely left behind.

It’s hard to believe now, in an era when kids movies top out at like 70-80 minutes long, that the Disney folks respected kids’ attention spans enough to think they’d sit still for a movie that runs two hours and 20 minutes long.  It occasionally drags, but there is still much to love here.  While the animation and special effects are a tad dated looking now, otherwise the film holds up extremely well.

Mary Poppins was the screen debut of a well-known Broadway actress named Julie Andrews.  She had previously been the star of the hit musical My Fair Lady, but was replaced by Audrey Hepburn in the movie version because Hepburn had more name recognition outside of the theatrical community – despite the fact that Hepburn couldn’t really sing.

In Mary Poppins, Andrews played the title character, a magical nanny who visits the Banks family in London, circa 1910 to care for the kids.  Mary appears to be a no-nonsense, somewhat humorless sort, however she is able to create adventures for the children and make chores seem like games.

The film paired her with Van Dyke – who at the time was star of one of the biggest sitcoms on television.  Van Dyke is very likable as Bert (though his Cockney accent is sometimes a bit too broad) – a man of all trades: one man band, artist and chimney sweep.  He also loves Mary in a chaste, Disney kind of way and becomes a father figure for the children that their distant, disciplinarian banker father could not seem to be.

It’s somewhat shocking, looking at it with modern eyes, how little of great excitement actually happens in Mary Poppins.  Kids in the new millennium are used to their thrills at a faster pace, but even if Mary Poppins lacks constant action, it makes up for it with imagination, beautiful artwork, a heartfelt story and some classic Disney songs.

This Blu-Ray release looks amazing, though otherwise I’m not so sure how different it is than the 45th anniversary DVD release four years ago or the 40th anniversary version released nine years ago.  Or for that matter, the movie itself obviously hasn’t changed from the earlier video incarnations of the title going back to VHS, it’s just a matter of letterboxing and extras.  However this classic film is always welcome and if you do not have an earlier version of this movie, it certainly does deserve a place in any video library.