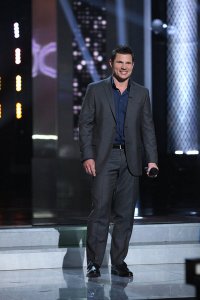 Nick Lachey knows what it’s like to be a young aspiring a cappella singer with his eye on stardom.  That was him, once upon a time (well, okay, in the way, way back 1990s).

He was originally a student at the CincinnatiSchool for Creative and Performing Arts.  He also worked part-time as part of a barber shop quartet at the local amusement park King’s Island (which itself gained pop culture status a couple of decades earlier for being the location of episodes of the classic TV series The Brady Bunch and The Partridge Family.)  Together with his brother Drew and friends Justin Jeffre and Jeff Timmons, he formed the boy band 98 Degrees, of which Nick was lead singer.

It was a time when this type of group was huge – N’Sync and Backstreet Boys were also topping the charts – and 98 Degrees was one of the biggest hits of the style.  They had eight Top 40 singles between 1997 and 2000, including “The Hardest Thing,” “Because of You,” and “I Do (Cherish You).”  The band broke up in 2002, when Lachey decided to go for a solo career,

Television came calling soon after, as Lachey and his first wife, pop star Jessica Simpson, became pioneers in the now-burgeoning field of celebrity reality shows with their hit MTV series Newlyweds.  It was always obvious, even back then, that Lachey was a bit more uncomfortable than his ex with the privacy invasion of having cameras watching your every move.  While Lachey found television a fun and fascinating world, he decided in the future to stick to more structured, less immersive roles.

Lachey started taking more and more acting roles, having a recurring role on the TV series Charmed and appearing on such shows as American Dreams, Hope & Faith and One Tree Hill.  He also dipped a toe into TV hosting with the short-lived 2008 series Clash of the Choirs.  The year later, he was offered the hosting gig on a new series called The Sing-Off, in which a cappella singers tried to impress celebrity judges, who over three seasons have included Shawn Stockman of Boyz II Men, Ben Folds, Nicole Scherzinger of Pussycat Dolls and Sara Bareilles.

While the show has a lower profile than other singing contests like The Voice, American Idol and X-Factor, it does have a strong following.  The third season winning vocal group, Pentatonix, has become a big touring and recording group since their win almost two years ago.  On the same week that Pentatonix’s latest disk roared up the charts, The Sing-Off is returning to the air after an extended break.  This season the series will be running in a condensed rush, with episodes covering the whole season airing every day or two for a little over two weeks.

This year Lachey and his 98 Degrees bandmates reunited after a ten-year break, releasing their first new album in over a decade, logically titled 2.0.  The group also hit the road for a massive tour with fellow former boy bands New Kids on the Block and Boyz II Men.

You just recently turned 40 and you’ve had such a great career. How have things changed for you, now that you have turned 40?

Reflect on the idea of a cappella singing. When you were high school, when you won Clash of the Choirs with “Flight of the Bumble Bee.” How did a cappella help you get a record deal in the first place?

Yes. Well, as you alluded to, a cappella singing has meant a great deal to me throughout my life and career. It’s why the show is so special for me to be a part of. I first started singing a cappella in high school. I went to a performing arts school. [I] spent my summers working at an amusement part in Cincinnati called King’s Island. I was in a barbershop quartet. I started off singing a cappella barbershop music, walking around the park and singing to guests. Then [I] continued to sing a cappella with different groups, ultimately with 98 Degrees.

When we put our demo together we put two different a cappella songs on the demo. In our audition for Motown records, Andre Harrell, the president at the time, asked us to sing a cappellain his office. We sang a Boyz II Men medley that we had worked up. That’s what convinced him to sign us. He signed us on the spot. That’s how we really got our start in the music business.

So a cappella singing is very, very meaningful to me. A subplot of that is to be able to be on the show Shawn [Stockman] from Boyz II Men. Having sung a Boyz II Men medley to get signed to Motown, it’s just kind of a surreal moment for me to be a part of this show with Shawn. It’s given a lot to me. This is my way of giving back to the genre of a cappella. I think it takes incredible talent to do; incredible talent to pull off.

Oftentimes people take it for granted. [They] don’t realize how hard it is to do, which is why I feel like The Sing-Off is so special. There are so many people out there that are responding to it. A cappella is going through a resurgence now; a renaissance, if you will. With all the attention that The Sing-Off has brought to it, and success like [season three winner turned recording artists] Pentatonix is having now. Their album just debuted in the top ten on the top 200. The success that they’ve brought to the genre. Movies like Pitch Perfect.

I think there’s just such a passion right now out there for a cappella music. So [I’m] very proud to be a part of The Sing-Off. Very proud of Pentatonix and all the success that they’ve had. Also very proud to announce that they’re going to be performing on our season finale this year, on December 23. Obviously, we’re all very proud of them here at the show and all the success that they’ve had since winning season three, and very excited to have them back this season.

You went back on the road with 98 Degrees this year. Was that fun and is it interesting to balance your musical and TV careers now?

It was a lot of fun. First of all, to get back together with those guys after more than a decade off. [To] be able to go on the road with New Kids on the Block and Boyz II Men and be a part of a sold out arena tour was very, very special. A great way to come back and experience performing with those guys again. So, that was fantastic.

To balance the two, obviously it’s all about scheduling. Shawn with Boyz II Men and I were both on the road as part of the package tour. Literally we finished our last concert in Indianapolis on August 4, and started The Sing-Off August 5. We went right from one into the other. When you’re doing stuff that you’re passionate about and it’s exciting to you, then it’s easy to rally and summon the energy to move from one to the other. I feel very honored and blessed to be able to do both. I know Shawn would say the same thing. It’s been a great year; an exciting year. The tour was great and now obviously very, very happy and proud to be a part of season four of The Sing-Off.