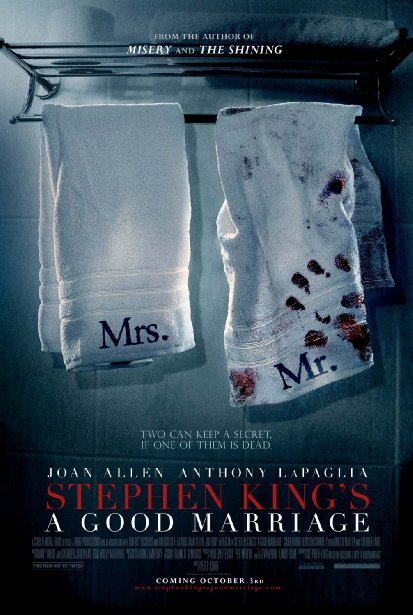 How well can you ever really know someone?

Even if… say… you have been married to the same man for 25 years.  You have been happy, shared a home, shared a bed, raised three children into adulthood, shared friends, been partners in business and life.

Even then, could you really know what they are capable of?  What evil resides in their hearts?  Their most guarded secret life?

Not really.  You may think so, but you could always be shocked when their darkest secrets are brought out to life.

Horror novelist Stephen King was intrigued by this dichotomy, how you often saw the spouses of horrific criminals that never had a clue about what was going on.  How much of it was going through life with blinders, how much was willful ignorance, and how much was simply the fact that no one shares everything with anyone?  Particularly a sociopath?

The idea spawned a short story called “A Good Marriage,” which was part of his story collection Full Dark, No Stars.

It’s a fascinating idea for a story and it was a terrifically interesting bit of work.  This film adaptation – actually penned by King (he hadn’t written a screenplay in years) and directed by Peter Askin – tries its best to capture the elusive paranoid horror of the original tale, but it doesn’t quite connect on the big screen.

Too bad, too, because it starts off terrifically.

This piques her interest, and she finds a hidden compartment behind the magazines.  Inside is a little box that had been made for her husband by their daughter as a little girl.  She opens the box and finds the driver’s license of a strange woman, yet one who seems oddly familiar.

It doesn’t take long for her to realize that the woman on the license is the latest victim of a prolific local serial killer named Beadie.  Beadie had tortured and killed twelve women at that point, taunting the police with letters about the crime.

But what is this woman’s license doing in her garage?  Is it possible that her husband could be involved in the killings?

And who is that strange older guy (Stephen Lang) who is always lurking around in the background?

Darcy starts researching the case and quickly becomes convinced that her husband may indeed be the killer.  But how is that possible?  Wouldn’t she have known, somehow?  Could she have missed that she was living with a monster?  And if so, what would she do?  Should she turn him in?  Should she cover up for him so that her life and her children’s would not be destroyed?  What about the other women?

More importantly – how can she act like everything is normal when he gets home, when things are as far away from normal as is physically possible?

Like I said, it’s an intriguing set up.  Sadly, A Good Marriage the movie kind of fumbles the set up a bit.  First off, the fact that he may be the killer is telegraphed way too early – even before it comes up in their life Beadie is the only thing that their friends and the news seems to be talking about.

Then Bob figures out his wife’s doubts too soon.  He confronts her for snooping and investigating him.  This leaves A Good Marriage in an odd sense of limbo for much of its second half, like they ran out of story before they ran out of film.

It was based on a short story, after all, so maybe they did.  A Good Marriage ends up feeling oddly padded, like it would make a hell of an episode in an hour-long anthology but then got stretched out too much.

It’s a shame, because Allen and LaPaglia are terrific actors who do not get enough good roles anymore.  They do what they can with A Good Marriage, but eventually it gets away from them.