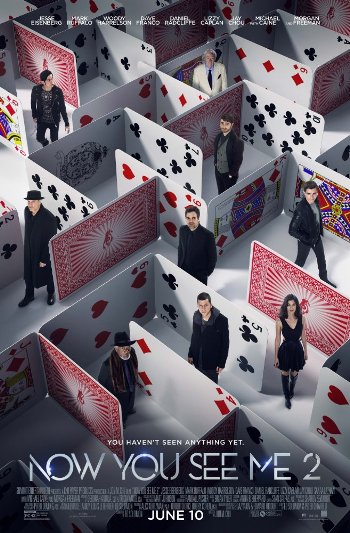 A few years ago, Now You See Me was a surprisingly pleasant diversion.  It was a Joker in a world of big-budget adventures in which a team of bickering street magicians pull off some jaw-dropping heists in plain sight of the whole world.  The hand is quicker than the eye, but is it quicker than millions of eyes, as well as cameras and computer monitors?

The sheer audaciousness of their acts were breathtaking, evil was thwarted and good was rewarded.  What more can you ask from a summer blockbuster.

Three years later, we have more of the same, and yet it is fundamentally different.  Now You See Me 2 is a good film on its own, but it does not quite capture the flush of excitement of its predecessor.  This movie is a trick that is well-done, but it is not quite as much of a mind-blower as the first.

For the most part the old gang is back.  Lizzy Kaplan replaces Isla Fisher as the female member of the Four Horsemen (which is sort of explained in the script, but not really).  The International Law Agent played by Mélanie Laurent has been dropped from the story, her role essentially taken over by Sanaa Lathan’s Fed boss.  Also, they have added a quirky new bad guy played by Daniel Radcliffe.

The other change in the new film is that the Four Horsemen are no longer perfect.  They go through a long series of blunders, missed opportunities and upstagings before their triumphant finale.

The film starts with the Four Horsemen finally coming out of hiding after a year and a half in the shadows, on the run from the FBI.  Their big coming-out party has them infiltrating a big tech conference and forcing a smug billionaire to confess his many, many faults before a world-wide audience of customers and investors.

However, somehow their well-planned trick gets hijacked by a mysterious pixelated force that exposes the Horseman and their FBI connection Dylan Rhodes (Mark Ruffalo).  While trying to escape, the Horsemen hop into a pre-set giant tube and when they come out, they are somehow in China.  And they have no clue how this happened.

It seems impossible.  For a while the audience is in shock right with the Horseman, how was that done.  Sadly, eventually the film explains the trick, which makes it lose most of its luster.  For some reason this new film seems to obsess on giving away the secrets of the illusions shown, which the original did sometimes, but with subtler sleight of hand.

In China they meet new bad guy Walter Mabry, a computer tech geek with a surprising mean streak, played by Daniel Radcliffe.  Mabry blackmails the Horsemen to steal “the stick,” an ultimate device that can hack into any computer in the world.

While Rhodes searches the world trying to find them, the Horsemen pull off the heist and attempt to double-cross Mabry.  In the meantime, the bad guys from the first film – Morgan Freeman and Michael Caine – are always on the outskirts of the action, seeming to work out their own nefarious plots.  It all ends in the grand finale, where the Horsemen make London their giant stage to do a final series of illusions and try to unmask the bad guys.

While Now You See Me 2 is not as well performed as the original, it still has the immediate adrenaline rush of a good trick well played.