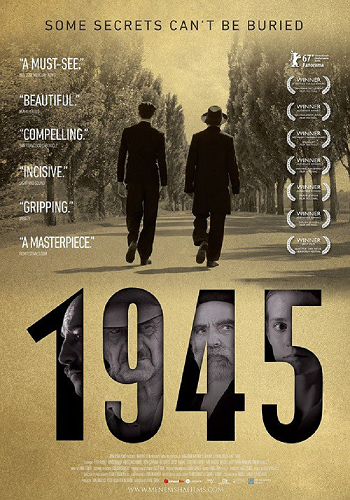 I have grown up watching movies and reading books about the Holocaust while my daughter’s generation continues with the spirit of “Never Forget.”

With all this history, I have never thought about the period immediately following the Holocaust; what a town would look or feel like outside of Germany, outside of the horrors. What it felt like in a town that had lost townspeople and the repercussions. This is the perspective shown in Menemsha Films’ 1945, a Hungarian film directed by Ferenc Török, based on the short story “Homecoming” by Gábor T. Szántó.

The movie does not give anything away at the start. It is a busy, happy day for Istvan, the town clerk. His son is getting married and the town is bustling in preparation. You catch a whiff of something adrift with the behavior of Istvan’s wife, but really, that could have been a reverse Oedipus complex – she is clearly not happy with the choice of bride, but really, her behavior seems a bit too dramatic for that old story.

(Not to spoil the film, but the mother is not wrong, the mother’s displeasure with the bride is a story in a story scenario that helps to distract from the bigger story.)

At minute 25 of the film, the station master, who has furiously ridden by bike from the train yard into town, quietly announces to the Istvan that “The Jews have arrived.”

I sat completely upright in my chair. What did he say? I was completely taken aback. The two men, one older, one younger, had arrived by train early in the film. They watched as two cases labeled as “fragrances” were loaded onto a horse drawn cart. They chose to walk behind the cart, knowing that they would be setting off on a one-hour journey. I didn’t really think too much about it at the time other than that they were strangers heading into a small town.

“They all look the same. Hats. Beards.”

The two men slowly walk on their journey to and eventually, through the town. An action so simple causes so many reactions as the expected stares and whispers turn into actions that can never be reversed.

This is a town with a dark secret that many are not ready to have exposed. In a story that feels as guilty as Macbeth, the choice to film in black and white was perfect and added to the bleakness that was palpable in so many characters in this town.

This film stole my attention and kept me intrigued through its 91-minute runtime. More importantly, it has added to my perspective of this period in history, the good and the bad; the monsters weren’t only wearing Nazi uniforms and that the undercurrent of anti-Semitism continued subtly and outwardly even outside of Germany. I have already recommended it to friends and family and will look forward to watching it again.