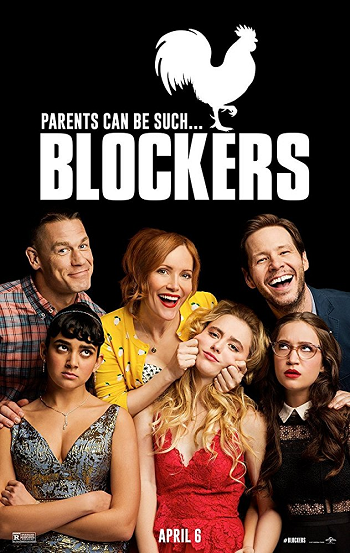 You can tell you are not in for a night of highbrow humor just when you look at the poster for Blockers, where they put a silhouette of a rooster on top of the film’s title. (Think about it a second, it’ll come to you.)

Therefore, I’m not going to lie, I went into Blockers with pretty low expectations. Good for them, they proved me wrong. Blockers is willfully stupid, sometimes cheesy and occasionally makes little sense, but credit where it is due, the movie is funny. Damned funny. Surprisingly funny.

Good for them for coming up with a new angle on an old plotline. And surprisingly, despite a few bumps in the road, it turns out to be a terrific ride.

Blockers is the directing debut of Kay Cannon, who wrote the three Pitch Perfect films. Interestingly, she did not write this one, which was done by Brian and Jim Kehoe. However, the new script fits in with the frenetic, girls-behaving-badly aesthetic of her previous movies.

Still, the low point in this film does also synch with the nadir of her previous films. Note to Kay Cannon after this film and Pitch Perfect: projectile vomiting is not funny, it’s just gross. And the more vomit you show, the grosser it gets. It doesn’t make you edgy that you are willing to do scenes with so many people throwing up all over, it just makes you exploitative.

However, other than the throw-up section and a few other beyond-tasteless sidetracks – a particularly gross beer chugging scene and a blindfolded sex game with two middle-aged parents come immediately to mind – Blockers works rather well as a turn-off-your-mind diversion.

Leslie Mann, John Cena and Ike Barinholtz play the flustered parents. They meet in a prologue when their little daughters become lifetime besties at their first day in school. Flash forward over a decade and those little girls are planning to go away to college and decide that they all want to lose their virginity on the night of senior prom.

Lisa (Mann) is a neurotic single mom who is already panicking about her daughter Julie (Kathryn Newton) leaving the nest – to the point that Julie has to hide the fact that she has been accepted as a student in far-away UCLA from her mom. Mitchell (Cena) is the happily married and surprisingly emotional tough guy whose daughter Kayla (Geraldine Viswanathan) is smart, but a bit of a wild child. Hunter (Barinholtz) is the cynical, alcoholic divorcé who wants to try to reconnect with his estranged daughter Sam (Gideon Adlon), who is also trying to come to terms with coming out of the closet.

The parents find out about the sex pact (it is literally given a hashtag – #SexPact2018) and spend the rest of Blockers trying ineffectively to track down their daughters and throw a monkey-wrench into their plans.

Cue lots of slapstick mayhem and some surprisingly sharp verbal humor as the chase leads to some learning and growing, on the part of all six main characters.

Blockers is never going to be anyone’s idea of a good or artistic film, but in the low-brow comedy world in which it treads, it is surprisingly successful. All Blockers aspires to be is a good time, and mission accomplished on that level.