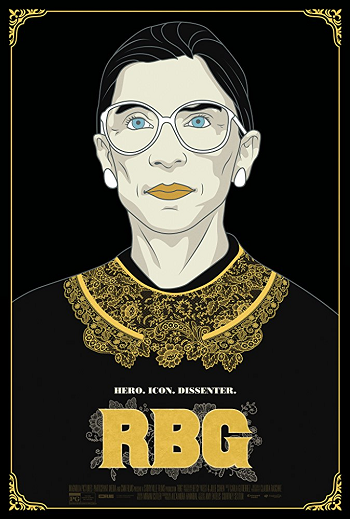 Ruth Bader Ginsburg may look like somebody’s little old bubbe, but in the legal and political world, she is a rock star. After all, how many nanas have a hip-hop nickname (The Notorious RBG) and their names and faces on bumper stickers, t-shirts, cups… even tattoos? How many are the inspiration for internet memes and viral posts? How many have been played by Kate McKinnon on Saturday Night Live? How many get into a media feud with Trump? (In fairness, this last one was very much out of character for the Bader Ginsburg.)

Ruth Bader Ginsburg is a strong and principled ideal for women, youth, and people who feel that they have been forgotten in life. And that is not just for being a justice, as the bio-documentary shows the woman was doing good things for the country long, long before President Bill Clinton made her the second woman ever to serve on the Supreme Court.

RBG takes a look at this strong, quiet woman, and how she has become a pop-culture phenomenon just for doing what she believes is the right thing. Think about that, with the political climate being what it is, here is someone who fights for the little people – all of the little people, no matter what sex, race or creed – with little regard to how it may or may not affect her own life. She worships only two things, her family and the constitution.

Ruth Bader Ginsburg is not a political animal. As noted above, the one time she crossed that boundary, speaking out against Trump during the 2016 elections, she quickly stepped back and apologized. Not because she was wrong, but because it was not her place. As a Supreme Court justice, she must appear to be completely neutral on all subjects, and that includes politics.

It’s funny to remember, with the way that the right has branded her a liberal, that she was appointed to the court she was considered center-left, arguably one of the least extreme of the progressive justices. It was only in the last decade or two, when the Court has become so much more conservative, that she had to move to the left to stand up for the people who would be left behind if someone were not there to speak with her.

And yet, politics was never really the only consideration. Back in a day, just a few years ago, there was the possibility for bi-partisan cooperation. One charming section looks at RBG’s odd-couple close personal friendship with the late conservative justice Antonin Scalia. “What’s not to like – except her views on the law?” Scalia good-naturedly asked in an interview clip of the two together.

We get a history of her career before the Court, seeing how she became one of the leading lights in civil rights jurisprudence, particularly standing up for women so that they would never have to deal with the sexual discrimination that she had to overcome to become a top lawyer.

Another one of the surprising delights of RBG is seeing what a wonderful love story she was involved in. Her husband Marty Ginsburg – who was one of the top tax lawyers in New York – was totally devoted to his wife, putting his own career behind the important work that his wife was doing. He was her best friend and biggest booster, and was obviously hopelessly devoted to his wife until cancer took him away 53 years into their relationship. Watching archival footage of Marty – who was charming and gregarious while his wife was a little shy and reserved – it is impossible not to see the obvious connection and devotion they both felt.

(By the way, apologies for in any way objectifying her, but after years of just seeing her as an elderly lady, I was kind of shocked by how beautiful she was as a young woman. Not that it matters at all, I’m just making an observation.)

Still, much of the fun of RBG is just getting to know the woman – seeing her hanging out with her grandchildren, following her when she goes traveling, seeing her work out in a “Super Diva!” sweatshirt, visiting the opera with her, including the times in which she was a special guest star of the company.

She also seems bemused but massively flattered by the celebrity she has reached late in life, becoming an inspiration to young people all over and an internet smash. She does not always have time to appreciate her pop culture following – her children debate upon whether or not she can even turn on a television set, but Ruth proudly tells a crowd that asks that she does have a smart phone (and had two until they took away her blackberry.) She also has a tendency to give friends “Notorious RBG” t-shirts as gifts.

There is something wonderfully cathartic about watching Ruth Bader Ginsburg enthusiastically laughing through her first viewing of Kate McKinnon’s portrayal of her on Saturday Night Live. “It’s marvelously funny,” she acknowledges. Then, when the interviewer asks if it reminds her of herself, she good-naturedly admits, “Not one bit. Except for the collar.”

RBG love is not just hype. Ruth Bader Ginsburg is a role-model to women… and men… everywhere. She shows an old-fashioned work ethic and a willingness to put other people’s needs ahead of herself. This movie reminds us – if we needed to be reminded – how lucky we have been to have her representing us for all these years.