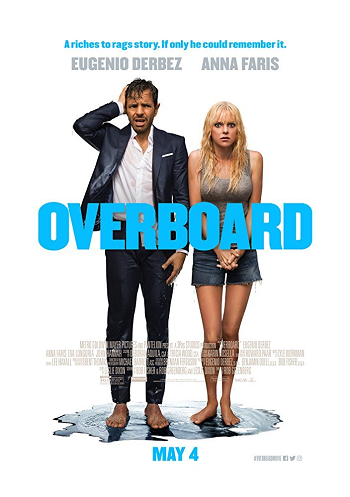 When you think of the movies from the 1980s that have been crying out for a remake, Overboard is not likely to make the list. Hell, if you limit it to Goldie Hawn movies crying out for a remake, it still would be far from the top of the pile. (I’d personally choose Private Benjamin, Cactus Flower, Shampoo, HouseSitter, The Duchess & the Dirtwater Fox, Swing Shift, The Sugarland Express, There’s a Girl in My Soup, Butterflies are Free and probably Foul Play above it.)

Overboard was not only far from the best Hawn movie, but it was considered kind of a box office dud upon release, before it got something of a following on video and cable. The storyline was kind of massively stupid, but it was kind of cute and funny in a turn off your mind kind of way. However, the only real memorable thing that came from the movie was the 30-plus year relationship between co-stars Hawn and Kurt Russell.

The new movie is in about the same waters – honestly there is no real reason for it to exist, but if you are willing to turn off your mind and give in to the fractured plot logic of the concept, it is fairly amusing. It’s kinda stupid, yes, but it does have some rather funny parts. You will laugh, and rather consistently. In the end, isn’t that the only thing that this particular film was setting out to do?

No one is confusing Overboard with Oscar bait or tricky artistic filmmaking. Isn’t there some sort of art in making a silly, cheesy crowd pleaser and doing a rather good job with it? I can’t totally compare it to the original… because I’ll be honest, I saw that once when it was new on video and I don’t all that have much memory of it at all, other than it was likable enough.

I do remember that Hawn played a bitchy rich woman who lost her memory. She was convinced that she was the wife of a poor handyman (Russell) who first spitefully used her as free maid service and babysitter for his cute kids. But, they eventually ended up falling for each other, and she came to respect the importance of hard work, love and a family.

Now I won’t even get into the obvious pitfalls of the plot – the kidnapping, the amnesia, the rote class distinctions, the overt sexism, the cute kids – other than to point out that a plotline which was far-fetched in 1987 seems nearly impossible today. The tabloid-favorite playboy son of the third-richest-man in the world disappeared and was apparently killed after falling overboard off his yacht and no one recognizes him from the internet, social media or gossip shows?

As you see from that description, the big change here is they flipped the sex – the stuck-up rich person is now a guy, and the hard-working single parent looking for a career and love is now a woman. And, frankly, by changing the sex of the victim to the man, the new story loses a little bit of the vaguely rapey, pre-#MeToo aspect of the original storyline.

Ironically, even though Anna Faris is playing the opposite role of Hawn in the plotline; her performance, her delivery, even her hairstyle, all are rather reminiscent of Hawn. (I’m saying that as a compliment, by the way.)

The major change they have made from the original – other than the sex flip mentioned above – is that they have turned the story into a bit of a comic version of a telenovela, which actually does make a certain amount of sense. Telenovelas are known for their highly dramatic, emotionally charged, not overly realistic storytelling, which fits well with the film’s central concept. Sure, the storyline is ridiculous, it’s supposed to be ridiculous, they seem to be saying. (Also, an interesting telenovela twist in this film is how much of the movie is in Spanish with English subtitles, far from the majority of the film, but still surprisingly often for a Hollywood domestic production.)

The telenovela style also explains the male lead being played by Eugenio Derbez, who is a massive star in Mexico and Latin America but is not so well-known when you cross the Rio Grande. Derbez is rather funny in his over-the-top portrayal of a spoilt, lazy heir. His acting style is somewhat reminiscent of Roberto Benigni’s good-natured mugging. You never doubt for a second that he is enjoying himself, even when he is being a total jerk. He doesn’t necessarily sell the more dramatic parts as well – though he can make sad eyes with the best of them. I’m not sure he and Faris have great romantic chemistry – after all, he’s probably about 10-15 years older than her – but they have good comic chemistry together. In this case, that’s probably more important.

Overboard turns out to be a flawed, but often enjoyable comedy. However, just like the original, I will not be at all surprised if I think back on it years from now and barely remember a thing about it.