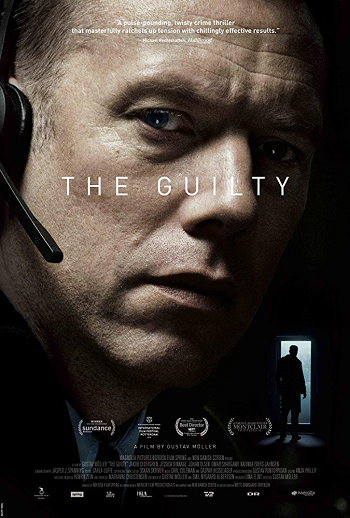 The Guilty is in a way a gimmick film, but man what a gimmick.

The entire film takes place on one set – an emergency services hotline. There is basically one actor throughout the entire film. He is intruded upon periodically by co-workers, but mostly it is one man sitting at a desk and talking on the phone in real time for the whole run time of the movie.

And yet, it is one of the most suspenseful films I’ve seen in years.

Jakob Cedergren plays Asger, who is working as an operator in Copenhagen’s Emergency Services phone bank (the essential equivalent of American 9-1-1). However, from the beginning something feels a little off about him being there. He is a hair too snarky or dismissive with some of his callers and does not seem to want to be there.

Slowly through calls and discussions with his colleagues, we realize he is a policeman who is currently on paid suspension from the field, working at the call center until facing a hearing the next day about some vague incident he was involved with.

He nearly hangs up on Iben (voiced by Jessica Dinnage), a desperate woman who is giving odd answers to his questions, before realizing that she is apparently being kidnapped and can’t speak out on what is happening to her because the kidnapper is listening to her side of the conversation.

Asger’s inner detective snaps in and he goes to work to do all he can to find the woman and figure out what is happening. He calls the police, calls his partner, and searches the internet for clues, all desperate to save Iben, and as well protect her two children, from the culprit, who he quickly comes to believe is her estranged husband.

However, what is really happening is much more complicated than he ever imagined.

While he is trying to save this woman and her children, we are slowly given more and more information on Asger’s life and on the incident which led to his suspension from the force. And, unknowingly, while trying to redeem himself by saving this family, he just makes matters much worse than they already were.

This type of style of filmmaking has been touched upon before – Colin Farrell’s Phone Booth, Tom Hardy’s Locke and Halle Berry’s The Call come to mind – however The Guilty is by far the best of these films. Also, unlike those films, The Guilty never cheats and changes setting or going out into the real world. The smart refusal to leave two rooms gives the film a claustrophobic quality that just fuels the suspense.

The Guilty is a delightful surprise and one of the better thrillers I’ve seen in a long time. Be sure to go and see this Danish original before Hollywood catches on to the story and messes it up with the almost inevitable English-language remake.