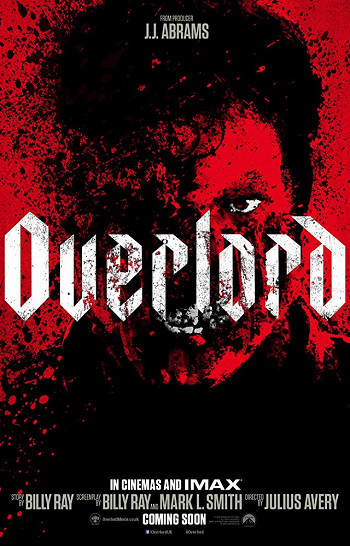 I have previously written that I don’t watch zombie or horror movies. Not my thing. I don’t enjoy jumping out of my seat and really hate reverting to my childhood fear of things that go bump in the night. I was surprised at how much I enjoyed Jordan Peele’s Get Out but justified it as more of a social commentary and really, the major horror bits were the evil characters getting it in the end.

Overlord was so entertaining. The one hour, 50-minute run time has never flown by so quickly. I jumped in my seat so many times, even when I already expected to be scared. The audience was laughing, gasping, and screaming in all of the right places.

The story felt like a mash up of lots of other movies. Nothing seemed particularly unique, but all put together in Overlord, it all felt right. The band of main characters were stereotypical of the characters we’ve seen in war movies of the past:

And somehow, through Abrams’ trademark character development, each character breaks away from their stereotype and become characters that feel fresh and worth rooting for (and in the case of Wafner, against).

The mission: to jump into Nazi occupied France and blow up a village’s church tower, that has been jamming aerial signals, on the eve before D-day. What they find is a Nazi medical experiment horror lab that must be stopped.

The moulage was INCREDIBLE – from blown-open faces to evil serum doing its deed, there were characters contorting in the craziest ways. There is so much to see that I feel certain that I will catch new things when I see it again.  If you enjoy alternative history, horror, sci-fi, war movies, Overlord is the movie for you.

Coming soon to theaters to scare you.