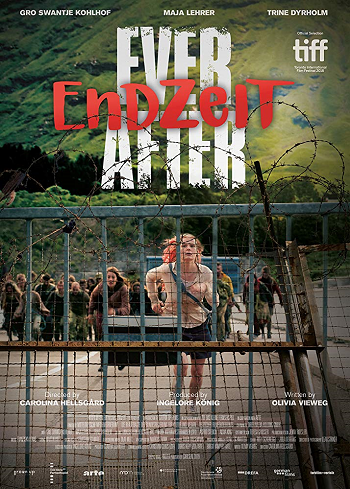 I’m not going to lie, I’m no fan of zombie movies in general.

The German film Endzeit – Ever After is better than many. It has some stylistic quirks and interesting ideas that makes it stand out in the (shambling, hungry, brain-eating) pack.

Yet it can’t totally avoid some of the pitfalls of the genre. Zombies are just basically dull villains; they are slow, they are stupid, they are completely driven by the id, they are easy to kill. The only real advantage they have as killing machines is that they travel in giant, hungry, violent packs. They can’t outsmart you, so they try to overpower and overwhelm you.

One smart narrative choice in Endzeit is that we don’t see all that many of the zombies through the film – and only a few times see huge packs of marauding undead wildly attacking. (And most of those scenes are in flashback.) I’m not sure if this is a narrative choice or a budget choice, though I want to give the benefit of the doubt that it comes down to a storytelling selection.

Instead, this is a road trip between two women who are desperately trying to survive in a dangerous world gone mad. It just happens that mad world has some zombies in it.

And Endzeit also has a bit of a not-so-subtle ecological message to impart, which is kind of nice. Perhaps the first green zombie film, it shows that the scourge of the undead may just have been the Earth’s way of resetting, returning us to the original natural order of animals, flowers and self-sufficiency.

Endzeit takes place in Germany in some indistinct time in the near future. It is two years after the zombie apocalypse. The few surviving humans are trying to rebuild, with two cities the centers of activity, attempting to cure the virus that causes the zombies as the survivors try to live safe lives in a world without power or utilities.

Our two main characters are the tough survivor Eva (Maja Lehrer) and a more vulnerable young girl named Vivi (Gro Swantje Kohlhof). Both have their own ghosts – Eva has killed many zombies, Eva blaims herself for the death of her young sister. Having only each other to trust, they try to go across the countryside in a train car, which breaks down in the middle of nowhere. They don’t really trust each other but have to rely on each other for survival.

As stated before, the world is not exactly crawling with zombies. Vivi feels safe sleeping out in the open and they both walk through barren areas, always alert but never feeling the need to hide. Still, the zombies do show up periodically. So as the women cross the miles, they get to know each other and depend on each other.

Unlike most zombie films, Endzeit does not rely on jump scares and graphic gore – though both of these things to show up periodically. Instead, it is more of a philosophical look at life on Earth, human expansion and the importance of relationships.

I still don’t really like zombie films, but Endzeit is better than most.