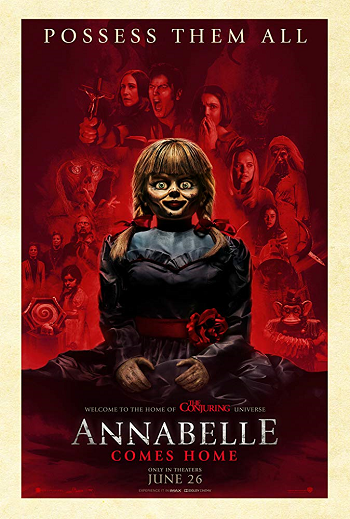 It’s sort of ridiculous to even try to criticize an Annabelle film. No one believes that they are fine works of cinema in the traditional sense. In fact, Annabelle Comes Home is the third film in the Annabelle series, and the seventh film (with more on their way) in the greater Conjuring movie universe – and only the first Conjuring could really be called a good film.

The real questions for these films are more basic, more visceral: Do they scare you? Do they creep you out? Do they make you jump in your seat and scream out involuntarily through the film?

The trailers for Annabelle Comes Home play up the return of Patrick Wilson and Vera Farmiga as real-life ghost hunters Ed and Lorraine Warren, in their first appearances in the Conjuring films (other than brief flashbacks) since the first Conjuring movie. This is a tiny bit of a bait and switch. Ed and Lorraine are around for maybe the first half hour and last fifteen or so minutes of the film, but they are not present for much of the spooky action.

However, their history as ghost hunters is vital to the evil that is afoot. You see, the Warrens had a locked room where they stored away all the evil, haunted and supernatural artifacts they had come across in their careers.

That evil shows itself to their young daughter Judy (Mckenna Grace), her teen babysitter Mary Ellen (Madison Iseman) and the babysitter’s best friend Daniela (Katie Sarife) while the Warrens are out of town. Daniela, who recently lost her father in a car accident (in which she was driving) slips into the Warrens’ locked museum of supernatural phenomenon and mistakenly sets the evil loose, in the form of Annabelle and many of the other ghostly inhabitants of the room.

Cue up an hour or so of things jumping out of the dark, chasing the girls and creating a deadly havoc around the suburban dwelling.

It’s weird to in any way compliment Annabelle Comes Home with subtlety, however in a weird way it is rather understated in its use of its title character. Unlike the recently rebooted Child’s Play series, which features another killer devil doll, you don’t see the little bugger rambunctiously running around with a big knife. She doesn’t make wisecracks as she mows down humans which are much larger than her. Those things get kind of ridiculous looking really quickly.

You never once see Annabelle move in Annabelle Comes Home. The doll is always quietly impassive whenever she is on camera. You just see that she has moved. You wonder where she will show up next. And somehow that is much creepier. Many modern filmmakers have forgotten this little aspect of suspense – what you don’t see is often much scarier than what you do see.

The storyline doesn’t make much sense, but it’s really not supposed to. It’s just a series of jump scares with a feel-good anti-bullying message pasted on, just because: why not? It also dips a toe into the importance of family and the necessity of not being paralyzed by guilt. Oh, yeah, and it strongly warns that if you see rooms with big “Stay out” signs, they are usually there for a reason.

As many of the Conjuring movies, it takes place in the past – specifically the early 1970s. (I’d say on a guess 1971 or 1972, maybe 1973 at the latest.) Big bonus points for the great era-specific radio pop soundtrack, and particularly for choosing Badfinger’s sublime hit “Day After Day” as a creepily repeated foreshadowing of impending evil.

This deep into the series, you know what you’re going to get with a new Annabelle movie. It’s not going to change your life or even be something you think of often after the movie fades to black (with yet another great 70s pop single – King Harvest’s “Dancing in the Moonlight” – playing over the end credits). However, if you’re looking for some funhouse scares, Annabelle delivers the goods.