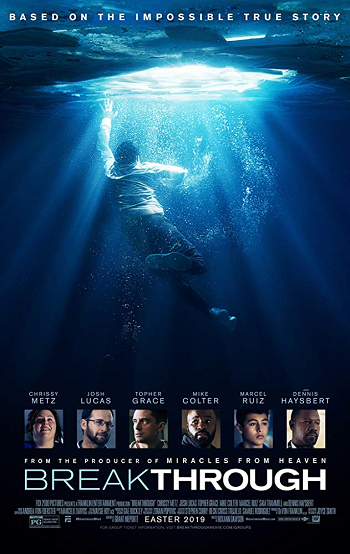 The problem with religious films is that you take from them what you brought in. If you are already a believer, you’ll find the film an affirmation of God’s greatness. If you are not so devout, you may feel manipulated, or even preached to.

Take Breakthrough, the “based on a true story” tale of John Smith (yes, that really is apparently the guy’s name, not just an every-man type of moniker), a teenage boy who fell through the ice in a frozen lake. He was underwater in the freezing cold for about 15 minutes and should have never survived. The overwhelming odds are that if he did live, he would be badly brain damaged. Yet, after an almost week-long coma he bucked the great, great odds and made a full recovery.

Religious viewers will undoubtedly take that as a miracle; his mother’s prayers, the community’s love and a viral “Pray for John” Facebook page saved the boy’s life. More fact-based viewers will probably feel that it was the hard work of the EMTs, doctors and nurses and the child’s own strong constitution that allowed him to live. More cynical sorts will think it is all a coincidence, an act of chance that this boy was able to return to normal when most others in his position would have died. In fact, assuming this boy survived due to his mother’s strong faith could be taken as a bit insulting to all the other people who did not make it through a similar situation, who may or may not also have had strong faith.

Any of those possibilities may be right, and they all may be wrong.

Some people may say God wanted John to live so he brought him back from the abyss. Others might say that if God really wanted John to live, he would not have let him be so reckless or stupid to blithely ignore – and even mock – the guy who was warning him and his friends moments before the accident that the ice was not safe, and they should get off of it immediately.

The problem with Breakthrough is that it goes under the surety that its viewpoint is the correct – and only – one. God has saved the day. The boy is brought back to life by his mother’s faith and the love of the community. People who feel any doubt are shunned and berated. Even the shell-shocked doctors and the atheist EMT tech who saved him are forced to acknowledge that they have seen a true miracle.

If the audience doesn’t see it from that angle, they are in for some hard time sitting through the sanctimonious parts of Breakthrough.

This dichotomy is best embodied in the lead character, the mother of the young boy, Joyce Smith – played by Chrissy Metz of This is Us. (John can’t really be the lead since he’s in a coma for more than half of the film.)

Some people will look at her and see a woman of strong faith, a charitable woman, active in her church and a tirelessly devoted mother. (A “tiger mama,” as one character calls her.)

At one point she even yelled at her husband, “I am the only reason that John is alive!” Yeah, okay.

Honestly, I was squarely in the second camp. Joyce Smith was one of the more actively unlikable lead characters I have seen in quite some time. Every time she said to God in prayer “I know you love me,” I could not help but wonder why. Joyce was just a few “isn’t that special”s and “Satan!”s removed from Dana Carvey’s old Saturday Night Live character the Church Lady. At least the Church Lady was amusing.

The fact that the lead character was so off-putting, so insufferable, made it hard to appreciate any of the truly gripping aspects of the film. There is even a short, inscrutable sidetrack towards the end when John is being mocked at school for being a living miracle, which is sort of the epitome of evangelical victimhood.

Look, there is a place in film for religious fare – even if it tends to be rather preachy and pedantic. There is an audience for films like this and they will undoubtedly be moved by it.

However, Breakthrough will not change the mind of anyone who is not already a convert. Most of them will feel like they were forced to sit through a two-hour long sermon.