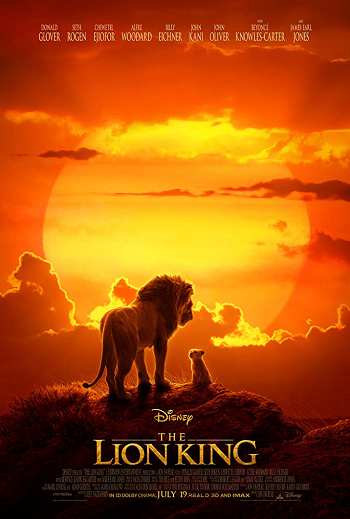 The Lion King is a proud revitalization of a story we all already love presented in a way a new generation can enjoy.

When this movie was first announced I thought it was going to be awful. Truthfully, as excited as I was to go to my first movie screening and write my first review for PopEntertainment, I couldn’t get myself excited to see this movie. As someone who watched the original Lion King over and over as a kid, loving it more and more each time, I was worried this film was going to be yet another of Disney’s – and many other studios – poorly thought out and overdone CGI remakes.

I think that’s what many people thought watching the trailers, which truthfully, I didn’t even catch. But I decided as a lover of the original and the Broadway adaptation, I should try to go into this movie with an open mind and an open heart. I was not disappointed.

To start off, the photo realism animation style is scarily real looking and absolutely beautiful. Sure, I give credit to the detractors that character models like Pumba or the hyenas are hard to look at times – but that’s exactly how those animals look in real life. So. if anything it’s an intentional artistic choice.

Characters like Simba and Nala looked stunning. Even more so, the surrounding savannah, the Pride Lands and the far away Jungles too. They were incredible to look at and were definitely a selling point of the film. I could be wrong on this, but with the photorealistic animation style Disney’s animation team was going for I’d say, for the most part, this film will hold up in terms of look and feel for years to come; it isn’t the type of CGI I’d see looking dated only a couple years down the road.

As for the voice acting – which in my view is what even more than the animation gave this film life – I’d say across the board as a fan of the original I was satisfied with the casting choices. Everyone executed their role close to the character’s original depiction and where there were changes, I think it was for the better.

Donald Glover as Simba, for example, did a wonderful job putting an innocence in the voice early on, while growing into a mature but still open hearted “man” as the film goes on. True to the original but with its own originality which I think is true for much of this film. Donald Glover sings well and his voice and voice acting help move this film along.

The same, if not more, can be said of Beyonce’ as Nala, because her voice acting and voice in general are incredible. However, I’d say she plays her depiction of Nala a little closer to the original voice acting wise whereas Donald Glover breathes a bit more originality into the character. That being said, this film musically would die on the vine without Beyonce’s strong and gracious voice. Enough said.

As for the supporting cast, Seth Rogan as Pumba I fell in love with immediately. He is hilarious in general and I thought he did a great job bringing new life and humor into the character; some jokes fell flat because they were too immature, but I think it speaks to this movie being made for kids rather than adults as it should be.

It took me a bit longer to like Billy Elchner as Timon but he grew on me eventually. I’d describe him as a bit of an off-brand John Mulaney, but that’s more of a compliment than an insult because in the end I enjoyed what he brought to the movie. I found Simba and Nala just as lovable and wholesome as the original, and I found Timon and Pumba just as funny and big hearted. I thought John Oliver was funny as Zazu and brought a lot of his own charm to the movie. All around good singing and voice acting.

As for characters added to the movie, and changes made, I for one loved Florence Kasumba as Shenzi. Having a strong female villain hyena character to face off directly with Beyonce’ as Nala was a good addition to the film story wise; also biologically speaking female hyenas are the dominant sex in their species so it makes more sense that way as well. I really wish her character was made more present, in terms of writing and screen time, throughout the film.

As for Chiwetel Eiofor’s portrayal of Scar, I felt it was mostly alright. In the end, I can see his performance was pretty minimal in terms of originality and fluttering from impactful to in all honesty barely there. Scar just wasn’t a highlight for me this time around. I liked the Hyenas a lot more because I think they were legitimately used for more than comic relief. I wish Scar’s famous song “Be Prepared” was done more justice in this remake because just like his performance in general, it was for the most part barely there whereas the rest of the songs were amazing.

In the end, my biggest criticism of The Lion King is that it didn’t take enough risks or have enough willingness to change up and add to the film. Where it did choose to do that, it was for the better. I personally would have loved to see more of that.

In general, this remake added a lot of life to the film for the better, in terms of beautiful animation as well as star-studded voice actors and singers. However, if it was trying to make any significant change in impact of the original film’s story or message, it definitely didn’t do so. That’s what I think people’s biggest problem with recent classic animation remakes has been – and it will be with this film.

Maybe was for the best though. I really enjoyed The Lion King as a lover of the original. I know my twelve-year-old sister will love the film as well. That’s really all that matters. Why try to take big risks in changing what is essentially the perfect story from the original. That’s like trying to retell Hamlet. You wouldn’t and they didn’t. Isn’t it better to redo the animation in beautiful photo realistic way – along with modern stars – in a way only possible today? Why not allow a new young audience to fall in love with our old stories all over again?

A film that knows what its purpose always a good thing. Whether you’re a lover of the film or have kids that have never seen it, I’d say The Lion King is one remake coming out this summer that’s worth watching.