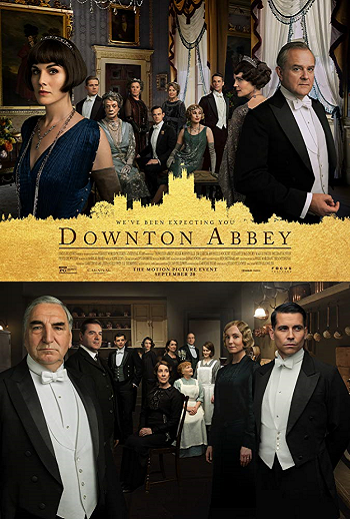 Downton Abbey is a film I couldn’t wait to end from the moment it started. It was a long winded and pretentious bore.

I personally never watched the award winning-television show that was Downton Abbey, so I went into this film knowing it might go over my head or not be the kind of film I usually enjoy. With that in mind however, I was hopeful and excited to experience something out of my comfort zone and dip into an existing franchise/canon I had no prior experience with.

To put it mildly, I was very disappointed. Watching Downton Abbey wasn’t just a bore, it honestly felt like a chore at points. The movie takes place across maybe three days’ time, and it really feels like we are there for every passing day, hour, minute, and second of those three days.

I was thinking as the film started off that maybe it was just because I was missing all the inside jokes or prior context for the story, but I couldn’t shake the feeling throughout watching that it was more than that. And just as a side note, I watched this film with a friend who was a huge fan of the television show. They felt the movie was a lot slower and felt hollow compared to the show, so take that as you will as well.

For me, there was a lot I didn’t like about Downton Abbey as a standalone movie. The pacing was awful for one, which made the movie feel overly long and super-slow moving. The story, in my opinion, was just bad. It focused on all the wrong things, at least in terms of what makes an exciting story.

The overall plot of the Downton Abbey film is that the King and Queen of England are coming to visit. Sounds super interesting right? I mean that’s what I thought. Wrong, because for whatever reason the writers decided the audience would better enjoy hearing about the fact that the King and Queen are coming by every person on screen. Then they get there and barely have any significant lines. Then the movie basically ends not too long after.

I understand Downton Abbey was a movie about the side characters, their stories, and prior context from the show. But before that it must be its own movie from start to finish and it was a very boring one. You’re going to have a movie hyping the arrival of the King and Queen of England the entire time and then you’re going to cast them as whoever, underwrite them to hell, and completely waste the opportunity you had to make their visit have the impact it needed? It was very disappointing.

Besides that, I really didn’t enjoy a lot of the acting performances in the film. It’s not that the performances were bad, many were great, but it was almost exclusively from the cast who were on the show prior and anybody extra felt out of place. Even though I didn’t watch the show previously, I felt like I could tell a clear difference just based on their chemistry and overall acting ability compared to everyone else cast. It’s things like that, that take me out of a film.

As for the writing style of the film, I can’t help but feel the writing was pretentious and overdone, especially when combined with the complete non-story of a plot that this film has. This film spends so much time on the mundane, and there isn’t much relief. I can’t say much more without spoiling said story, but I’ll just say from start to finish Downton Abbey is the worst combination of pretentious and predictable. It just wasn’t an enjoyable watch for me.

Now, that was rough, I was not very nice to Downton Abbey. There was some stuff I liked about this film that needs to be said. For one thing, there was a lot of gorgeous set design and costuming throughout that I really enjoyed. I also loved some of the side stories and story ideas, but none of what I liked was fleshed out or focused enough to save the film for me.

For example, there’s a side story within the Downton Abbey film about the people who feel they are “outsiders” in terms of the family and the established order of things within the film. I found those to be some of the film’s most compelling moments. Basically, there was clearly potential for this film to connect with me and be an enjoyable experience but the way it was structured ruined it before it even got the chance to start.

In closing, I have two things to leave you with. If you’re a fan of the television show I’m sure you’ll see the film regardless of what any reviews say but keep in mind you may be disappointed. If you’re like me and have no experience with Downton Abbey, you have no reason to see this movie and you shouldn’t see this movie. It wasn’t good, I’d rather wait in line at the DMV than watch Downton Abbey again.