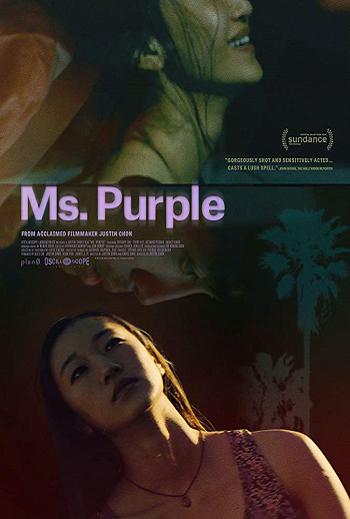 A nearly constant sense of melancholy hovers over Justin Chon’s Ms. Purple; a deep purple, angry bruise on the souls of its characters.

Set in Los Angeles’ Koreatown neighborhood, it is the story of a broken family being held together by the daughter. That daughter, Kasie (Tiffany Chu), was doted on as a young girl by her father (James Kang). The son Corey (Teddy Lee) didn’t have it so lucky, with the father physically and mentally abusing him. Their mother left them years earlier, despite that father’s pathetic attempts to use the children to get her to come back.

Years later, dad is dying, laying in a bed at home in a coma. Despite everyone telling her to put him in hospice, Kasie wants to care for him, working in a demeaning job as a doumi girl, officially a hostess at a big-money local karaoke bar, but essentially just a step or two above paid escort.

When the day care nurse watching her father leaves the job because Kasie can’t afford to pay her – and she thinks that Kasie is wasting her money not putting him in hospice, Kasie resolves to care for her father himself. She reaches out to her estranged brother, who has become an unemployed slacker just trying to survive. Corey agrees reluctantly to help his sister, and they slowly try to mend their own problems.

Corey is not the world’s best caretaker – he tends to push the unconscious father’s bed around town when he needs to go out – but even he is trying to come to terms with his past with his dad.

In the meantime, Kasie is trying to find some fun and some money, going to parties with her customers and being patronized and used by clients. She has become numb to most everything going on around her.

However, eventually it all gets to be too much, and everything blows up.

These scenes are interspersed with flashbacks of their childhood and the father’s slightly creepy devotion to his daughter and his blaming the son for their problems.

As you may imagine, Ms. Purple does not make for easy or comfortable viewing, and yet there is something profoundly and sadly beautiful about the film’s hard-bitten moodiness.