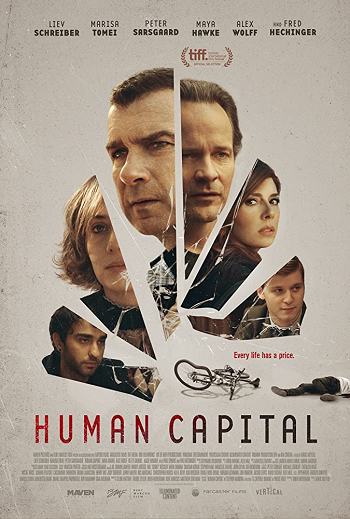 hu·man cap·i·tal (noun) – The skills, knowledge, and experience possessed by an individual or population, viewed in terms of their value or cost to an organization or country.

In the modern world, the concept of human capital has been seriously devalued. This film, a look at the haves and have-nots in the Trump era, tells some stories of modern life, showing them from three tangential perspectives, most of which underline the cheapness of human life and experience this the current atmosphere.

Knowledge means little. Empathy means less. Everyone is out for themselves, to a point where they feel slighted when someone else tries to advance their own agenda. The characters in Human Capital, particularly the ones on the top of the heap, seem to believe people are only good for helping you, otherwise they should just go away and leave you alone.

Whether it is your wife, or your friend, or your lover, or your son’s girlfriend’s dad; they are all a means to the end. And if their end does not end up so nice… well, that’s their problem, isn’t it?

In the immortal words of Mitt Romney, “Industries are people, my friend.” And people, well they are just cogs in a wheel, a necessary appliance which can be disposed of when its usefulness is done.

It’s the way of the world these days, I suppose, but it’s kind of a drag to watch in a film. Even a film which is peppered with some fantastic performances by terrific actors.

Of course, only the first two thirds of Human Capital deal with the treachery of business. The third section goes in an entirely different direction – though many of the same characters and character traits are still involved – a walk on the wild side of crime and mental illness.

The oddball Rashomon-like timeline doesn’t help, though, as we see several occurrences from different perspectives and perceptions on the action, with the storyline bopping back and forth. The problem is this quirky structure as used doesn’t necessarily provide more clarity on the storyline, often it just adds to the confusion and sense of blind fate.

The first section revolves around Drew (Liev Schrieber), a small-time real estate broker who sees himself as swimming with the sharks. When his daughter Shannon (Maya Hawke) becomes the girlfriend of the son of a big-time hedge fund manager named Quint (Peter Sarsgaard), Drew thinks this new relationship can get him entre into Quint’s flashy world. (Actually, Shannon is just a beard for the son, who is still wrestling with coming out of the closet).

Drew unwisely enters into a business deal with Quint – although he doesn’t have the money and has to fudge the legal documents to get involved – and the deal goes south almost immediately. And you know what? Drew problems are all of his own making. He probably does deserve the possibility of bankruptcy, jail, losing his home and family. He opened himself up to ruin through a get-rich-quick greed and willingness to cut corners and skirt the law. That doesn’t make it any easier to watch him desperately begging to save himself.

The second section revolves around Quint’s trophy wife Carrie (Marisa Tomei), an aging beauty who is tired of being an accessory. She finally finds a passion project – renovating a closed local theater and arts center and bringing it back to life. Carrie begs Quint to let her buy and fix the place, but as soon as things get tight Quint snatches the dream out from under her. Also, their not-quite-out son may or may not have been involved in a mysterious hit and run car crash which left a jogger for dead.

The final part revolves around Shannon and her growing affair with a disturbed young man named Ian (Alex Wolff). Meeting him at the office of her psychiatrist stepmother, Shannon recognizes that the guy is trouble, but is intrigued by his danger, and sets about trying to save him from his demons, which is easier said than done.

All of the stories cross and double cross. All of the characters have more complicated lives and motivations than we originally expect, and almost everyone is pointed straight towards some level of tragedy.

It’s nice to find a film which has ideas and ideals, and something important to say about modern culture. This makes it all the harder to say that Human Capital is much easier to respect than to actually enjoy. Almost all the characters are selfish and wildly unlikable, all doing the exact wrong thing at the exact right time.

In the end, you must ask yourself if you expect any better behavior from any of these people, and whether any of their eventual fates are undeserved. With very few exceptions, the answer to both of those questions is no.

Just because a movie is smart and well-made, that doesn’t mean you are going to like it. This is a problem which eventually bankrupts Human Capital.