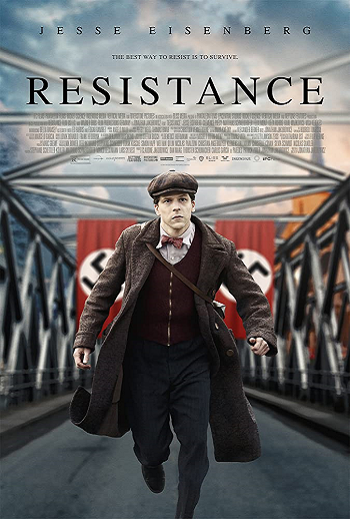 Looking for a little perspective during this coronavirus quarantine period?

Try watching Resistance, the 2020 film written and directed by Jonathan Jakubowicz. The film is based on the true story of Marcel Marceau’s involvement with the French Resistance during WWII, helping thousands of Jewish orphaned children to escape Nazi Germany. It features Jesse Eisenberg in the feature role.

The film was tense throughout with little room to come up for air – not the life story I had anticipated for the legendary French mime.

Marcel Mangel was raised the son of the local butcher, discouraged from the arts, but with an unflappable passion to create and perform. While known for his clowning abilities, Marcel identified as – and strived to be – a serious actor. He was focused in his early years on the theater.

When a friend pulled him in to assist in the distraction of 120-plus newly orphaned children, who had just suffered the traumatic loss of their parents to the Nazis, Marcel was an initially reluctant and quickly overwhelmed participant. He appeared to stay in the role to impress Emma, the serious young woman that Marcel wished to marry.

Resistance is hard to watch, from its brutal opening scene and onward. We’ve grown to expect this of Holocaust based films. But it also tells the story from a different perspective, when to fight back and when to fight smart to obtain the best possible end.

When faced with the hard choice of directing his energy on the nearly no-win fight directly against the Nazis, Marcel makes the difficult choice to refocus his energy on helping to bring children to safety. The goal is that if he can help any of these Jewish children to survive, the Jewish people will in fact win, through their enduring survival.

Matthias Schweighofer plays a chilling, sociopathic Klaus Barbie, the “Butcher of Lyon” and his and Marcel’s stories cross an unthinkable number of times.

Clemence Poesy plays Emma with joy and strength and hope. She is a heroine that we didn’t even know we wanted, and it is lovely to watch her relationship with Marcel grow in the most harrowing of times and circumstances.

Ed Harris has a small-but-important role as the US four star general, turned storyteller of Marcel’s story as a means of inspiring his troops.

And finally, Jesse Eisenberg, in the feature role, plays an awkward, intelligent Marcel with a stunning mime performance at the end of the film. If there is one criticism that I have of this thrilling story, it is in Eisenberg’s distracting accent that is not quite French, not quite Yiddish/Hebrew, and not quite there.

Lucky for us, it was usually absent, so it became more reminiscent of Kevin Costner’s on and off Robin Hood accent, joked about so long ago. A criticism like this feels so wrong when Eisenberg is such an otherwise consistent, strong actor who plays the role with sensitivity and his trademark awkward seriousness that feels right.

I was meant to watch Resistance as part of the 2020 Gershman Philadelphia Jewish Film Festival, but like everything else these days, the screening was cancelled due to the current need to avoid large gatherings. But really, watching the horrors of the conditions these resistance fighters and orphaned children had to endure from the comfort of my living room was a not so subtle reminder of how lucky we are, in spite of our current quarantine situation.

Resistance is available to watch Video on Demand and digital release starting March 27th. Add it to your queue!