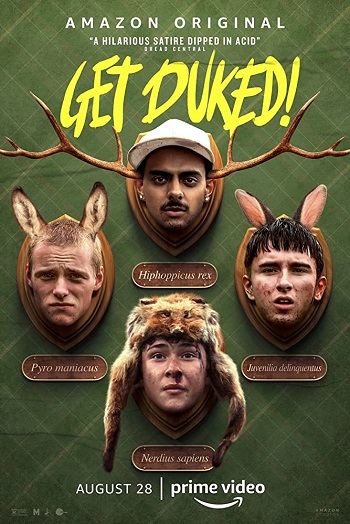 Get Duked! may be one of the worst film titles ever, but don’t let that scare you off. This irreverent British comedy is really a pleasant surprise and one of the smartest genre parodies since Simon Pegg and Nick Frost’s “Cornetto” trilogy (Shaun of the Dead, Hot Fuzz and The World’s End) or Joe Cornish’s Attack the Block, and most specifically Taika Waititi’s Hunt for the Wilderpeople, of which this film is rather reminiscent.

The “Duked” in the title refers to the annual British “Duke of Edinburgh Award,” named after the Queen’s late husband. I won’t even bother to try and explain it, we’ll turn to Wikipedia for that: “The Duke of Edinburgh’s Award (commonly abbreviated DofE) is a youth awards program founded in the United Kingdom in 1956 by Prince Philip, Duke of Edinburgh, that has since expanded to 144 nations. The awards recognize adolescents and young adults for completing a series of self-improvement exercises modelled on Kurt Hahn’s solutions to his ‘Six Declines of Modern Youth.’”

Essentially, to overly simplify things, in this film it’s a long trek across the barren Scottish hills and woods, designed to teach young boys (and girls) survival through such life skills as teamwork, orientating and foraging. (The original title for the film was the much smarter and snappier Boyz in the Wood.)

It’s an odd, somewhat obscure subject for a horror comedy, which is probably one of the reasons it works so well. Add a breezy and not too in-your-face anti-Brexit message and it’s a surprisingly entertaining film.

Now truth being told, the comic aspects of Get Duked! are much more satisfying that the horror parts, which are cartoonish and over the top, but also in many ways rather unnecessary. I would have been perfectly happy to spend an hour and a half with the three drugged out teen delinquents who are there as punishment and one over-achieving good boy who thinks it will look good on his transcript for university.

For the most part, these kids have no interest in being there, nor any skills for traversing the hard terrain. And that was before it turned out that there were people spying on them from the hills, with rifles, bombs, swords and odd hallucinogenic drugs. (The kids were okay with those.)

The kids were mostly types, but they were mostly relatively funny types. There was Dean (Rian Gordon) the drug-addled “leader,” Duncan (Lewis Gribben) the stupid football hooligan, DJ Beatroot (Viraj Juneja) the Indian wannabe rapper with a terrible rap name and Ian (Samuel Bottomley) the book smart but naïve nerd.

They mostly accidentally survive the dangers of nature and homicidal adults, with most of their plans going spectacularly awry, and yet somehow working anyway. It’s sometimes silly, sometimes stupid, and as stated before the violence is occasionally way over the top, even if it is handled with a studied Looney Tunes irreverence. Yet, somehow for the most part Get Duked! works. It won’t be on any best foreign film Oscar short lists, but it’s goofily funny, and with the world such a serious place these days, we can use a bit more of that.