I let a lot of things go when the pandemic shut-down kicked in. My hair grew out; I ceased emailing and texting with a lot of good and great people; since I was able to get free food from a city program, I took advantage of it even though I ate pretty much the same boring thing every day. Sometimes, I even forgot to brush my teeth.

Previously, I was used to going out to different restaurants daily – some great or not so much. I’d be at receptions after special screenings and Q&As with various actors and directors. Suddenly all that was gone. I often would swing into a hotel lobby for the Wi-Fi and a chance to relax and write or meet with various people.

So, it’s been quite a Spring and Summer. Without films and music, I needed distraction. When my friend lent me two DVD sets of sci-fi TV series, I was provided with the perfect alternative. By binge-watching them, the on-going escapism helped me survive the pandemic pause. And it’s a perfect thing to do for the holiday weekend.

First, I jumped into Babylon 5 – with its five-season arc based on a floating city in space. Some said it was like Star Trek: Deep Space Nine maybe better, maybe worse.

Unusual for the era in which it was released, Babylon 5 was like a “novel for television” with a defined beginning, middle, and end. Unfolding over its five 22-episode seasons, the Babylon 5 space station – built in the aftermath of inter-species wars – served as a neutral focal point for galactic diplomacy and trade. In essence, each episode was like a chapter with the human military staff and alien diplomats stationed there caught up in various political machinations, shifting alliances and layers of betrayal (not unlike today’s political intrigues). Each season contained plot elements which permanently changed the series’ universe.

With most storylines centered around a core of about a dozen species, Babylon 5’s embroilment in a millennia-long cyclical conflict between ancient, powerful races and their aftermaths, offered fabulous escapism. Episodes focused on the effect of wider events on various characters, addressing themes of personal change, loss, subjugation, corruption, defiance, and redemption. 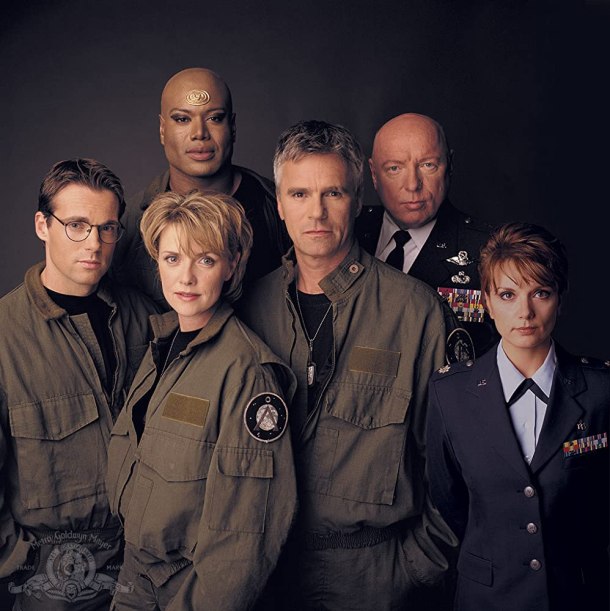 And then there’s Stargate SG-1.

In this decade-long series, Colonel Jack O’Neill, Major Samantha Carter, Dr. Daniel Jackson, Teal’C and General George Hammond defeat the myth-making Goa’uld and save Earth time and again by traveling to countless worlds through a series of wormholes generated by the Stargates. As the series evolved from the discovery and implementation of Earth’s Stargates, audiences learn of the complex millennia-long dynamic between the Ancients, the Asgard and the Goa’uld, and how they all fit into humanity’s evolution. The first team’s four main characters in “SG-1” explore the galaxy and more through the vast hyperspace network and evolve into richly developed personalities as they battled various interplanetary threats.

The series lasted 10 years and went through a few TV movies as well. It engendered spin-offs and built up quite a viable universe with a few references and nods to Star Trek, Farscape and other sci-fi franchises. During the days in which I was sucked into the DVDs, the series became quite a touchstone for me. I would get up and do what I had to do as the anticipation of sitting down and viewing the next episode built up in me.

What was more important to me in all this was the notion that such a binge could save minds and allow for some kind of repair. It doesn’t matter so much what the particular sci-fi series is being viewed or how they build on ideas which both encompass and parallel current political dynamics, but the experience itself.

Being pulled out of present-day traumas and toil offered a salve for pandemic PTSD. Getting immersed in the problems of Babylon 5 or the trials and tribulations of the SG-1 team, allowed me to get a breather.

While I’ve been through TV marathons such as a MoMA-sponsored weekend-long engagement with Twin Peaks: The Return (which I wholeheartedly recommend if only for its general strangeness), binge-viewing offered a whole new way to experience media. As a result, such binging transformed the piecemeal experience of watching episodic TV into an expansive feeling of traveling, of taking a trip, through a wormhole into a mind-altering respite from pandemic panic.