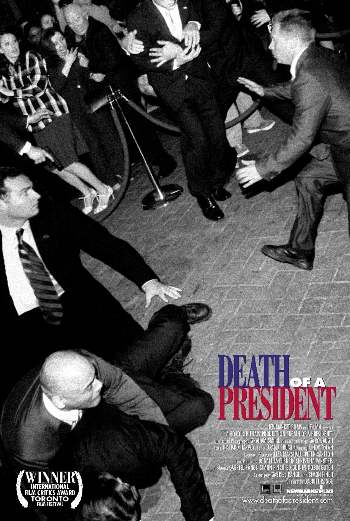 Death of a President

Death of a President has gotten most – if not all – of its notoriety, because of its central conceit.  It is the movie that – through special effects – dramatizes the murder of George W. Bush.

Detractors are saying that it is a dangerous and unnecessary provocation and I’m not sure that I totally disagree.  Not that I think that there will be trigger-happy copycats out there, but I’m not sure that any living person deserves to have people imagine their demise as entertainment.  After all, even the most vehement Bush detractors do not want to see him dead.  An extremely lengthy jail term would more than suffice.

Knowing that most sane people have no interest in seeing Bush shot points out that this is all just a gimmick.  Granted, it is a very effective gimmick; no one in the world would have even have heard of this film if not for its money shot.

Not that the movie is necessarily exploitative, if anything the actual “assassination” is handled with extreme restraint.  There is just a shot sound effect, a quick rushing of Bush to a limo and general chaos.  You see no actual violence.

However, you do have to wonder why the creators could not use a fictionalized President and Vice President.  As far as plot, it would not change much.  It just returns you to the idea that it is for shock value.

Death of a President plays out as if it were a documentary from somewhere in the not so distant future looking back at the day in which Bush is shot to death after a Chicago speech and the way it changes the world.  (The date of the crime is to be October 19, 2007 – almost a year to the day after the film’s release date in New York and LA.)

Once Bush is shot, though, the movie turns into a relatively standard issue whodunit, with actors portraying Bush’s speech-writer, secret servicemen and others who are involved doing talking head explanations.

Surprisingly, for a movie which would seem – just from its storyline – like it would be inherently against Bush, the man actually comes out looking pretty good.  (Well, except for dying and all…)  Dubya is much more coherent, determined, forceful and presidential than he ever has been in real life.  Coscreenwriter/director Gabriel Range seems to be trying to be rather impolitic, occasionally saving his vitriol – separately but equally – for the anti-Bush protesters and Dick Cheney.

The protesters are in general shown to be an unruly, violent, anarchic mob.  This is particularly evident in one scene where the the protestors block the Presidential motorcade and another quick shot of the crowd cheering when it is announced that he was shot.

Cheney, on the other hand, gets much more specific vilification.  He uses the attack to create an even harsher Patriot Act, blames al Qaeda and works behind the scenes to make sure that an innocent middle-east immigrant is made the scapegoat, even though the federal authorities only have a very superficial case.

The meld of real life footage and fictional recreation is generally pretty seamless, though most of the time you do recognize that you are just watching a parlor trick.  One scene, in which Cheney delivers Bush’s eulogy, is the only time in the movie where the special effects melding reality and drama reach a level of the astounding – you sit there wondering how the hell they did that.

However, you can’t get over a more nagging question, why did they do that?  Death of a President is fascinating as a technical exercise and makes for a reasonably gripping mystery, but it somehow feels exploitative to plug real people and issues – even ones as incendiary as Bush and the war in Iraq – into what is undeniably a fictional plot. (10/06)