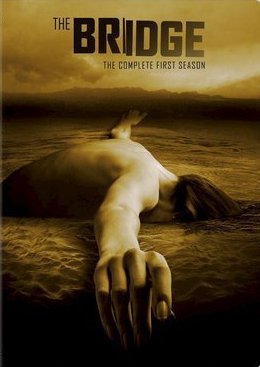 The Bridge – The Complete First Season

The Bridge: The Complete First Season

Juárez, Mexico was recently found to be the most violent city in the world, therefore it makes a fascinating setting for this dark, surreal crime drama.  Known for its astronomical murder and kidnapping rates (since the ’90s nearly 400 women have been killed there, and an additional 400 have simply disappeared), the town is a fascinating contradiction, a beautiful yet horrifying zone of corruption, crime, violence, sex and drugs.

This history makes it a perfect setting for The Bridge.  Based on the Swedish miniseries Bron, The Bridge exports the story to take a colorful and at the same time pitch black look at life and crime at the border between Juárez, Mexico and El Paso, Texas.

The series is thoughtfully put together by Cold Case creator Meredith Strehm and former novelist Elwood Reid (If I Don’t Six).

In The Bridge, a savvy-but-streetwise Juárez cop (not corrupt, like most of his brethren, but not above cutting corners, either) has to partner up with an obsessively compulsive by-the-book female cop from El Paso in order to track down a vicious-but-crafty serial killer.

It helps that these cops are played by extraordinarily good actors.  Recent Best Actor Oscar nominee Demián Bichir (A Better Life) plays Marco Ruiz, the complicated Juárez policía.  Ruiz is a good cop, proud that he can not be bought off like so many of his fellow cops, but the sheer volume of the death around him has made him a bit complacent.

His match from the other side of the border is Det. Sonya Cross (played by Diane Kroger of Troyand Inglorious Basterds.)  Cross is a brilliant policewoman, but also has OCD, is completely by the books and completely socially awkward (apparently she is afflicted with Asperger Syndrome.)  She decided to became a cop when her older sister was murdered when she was only 15, however she has developed a very black and white view of right and wrong, making her difficult to deal with.

These two polar opposites are thrown together when a killer dumps a body literally on the border of the US and Mexico, right on the bridge which separates the two countries.  This is only the first of several killings which throw the two cops into an odd rogues gallery that includes a jaded alcoholic reporter (Matthew Lillard), a young widow whose rich husband apparently had some underworld dealings she did not know about (Annabeth Gish), an odd marble-mouthed mountain man (Thomas M. Wright) who has some shady dealings in Juárez, a local cartel leader (Ramón Franco) and a double-crossing co-worker (Eric Lange) of Ruiz’s wife (Catalina Sandino Moreno).  All of this is watched over bemusedly by Cross’ Lieutenant, who is good-humoredly played by Ted Levine (who is best known as crazed killer Buffalo Bill in Silence of the Lambsas well as playing a similar top cop role in Monk.)

I spoke with Bichir recently about the show and he said, “We were all happy because… the reactions of all kinds of audiences – in Mexico and many other parts of the world – have been tremendous.  Very, very inspiring….  I’m really, really grateful and honored and grateful to be a part of that cast.”

Bichir is right, the acting on display in The Bridge is often quite stunning, as are the unpredictable twists and turns of the plot.  The show is not for the faint of heart, it is often disturbingly dark, but it is also one of the best new shows in years.