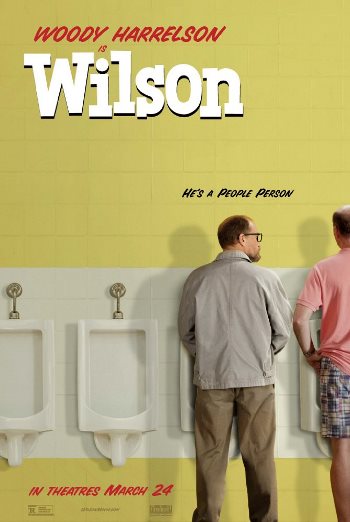 The title character in Wilson is the type of guy who, if you were to see him on the street, you would go out of your way to avoid. Loud, opinionated, condescending, self-centered, eccentric, brutally honest, overly spontaneous, overly sure of himself, unaware of social boundaries, somewhat anti-social – he’s the type of guy who would be a disaster to be stuck next to at a party. Not that he would ever go to a party, because parties are stupid.

This is in part due to a hilarious performance by Woody Harrelson in the lead role. Much like his role of the world-weary high school teacher Mr. Bruner in the terrific summer comedy The Edge of Seventeen, his new role of Wilson is yet another reminder of what a terrific comic presence the guy has after a series of extremely dramatic roles.

While Mr. Bruner ended up being a much more sympathetic character than Wilson is, they share a core truth – Harrelson’s ability to take potentially unlikable characters and make them sympathetic, give them a bit of heart and soul.

Wilson is based upon a graphic novel by Daniel Clowes. (Clowes also wrote the screenplay for the film.) This is the third film based upon one of Clowes’ books, including one of the great, underappreciated films of the last decade – the 2001 film Ghost World with Thora Birch, Steve Buscemi and a then mostly-unknown Scarlett Johansson.

I’m not going to lie: Wilson is not as good a film as the near-superlative Ghost World. (It is, however, better than the other Clowes adaptation, Art School Confidential.) However, the films share a jittery, offbeat vibe and eccentric plotting.

Wilson is a forty-something eccentric everyman. (In a recent interview, writer Clowes told me he chose the name because he wanted something common in which you’d never know whether it was the first name or last.) He is living in his childhood home, not apparently working, and still hung up on his ex-wife Pippi (Laura Dern) who had left him 17 years earlier and apparently fell into alcoholism and prostitution. The only thing Wilson appears to care about at all is his small dog. He also has a disconcerting tendency to go into sparsely populated places, find some stranger sitting alone, sit by them and start a conversation.

In short term, Wilson’s only friend tells him he’s moving out of town (and the friend’s wife allows how she has hated Wilson for years) and on top of that, Wilson’s father dies. Feeling adrift and unsure of what his life means, Wilson starts thinking about whatever happened to Pippi. When a casual conversation with an old friend reveals that Pippi has moved back to town, is on the wagon and trying to get her life together working as a waitress, on a whim Wilson decides to surprise her at work.

Quickly their passion returns – for good and for bad. Wilson and Pippi obviously care deeply for each other, but they also push each other’s buttons. When Pippi drops the bombshell that she had been pregnant when she left him and had given up the baby for adoption, Wilson starts obsessing on meeting the grown daughter he never knew he had and forming an oddball nuclear family.

In the end, Wilson’s story takes a few too many plot leaps, a few too many quirky sidetracks and also occasionally wallows in a sentimentality that the characters in Ghost World would have sneered at.

However, the plot is almost beside the point in Wilson. It works better as a character study of some smart-but-bruised outsiders. And even if the film doesn’t always work, when it does connect, it’s funnier than it has any right to be.