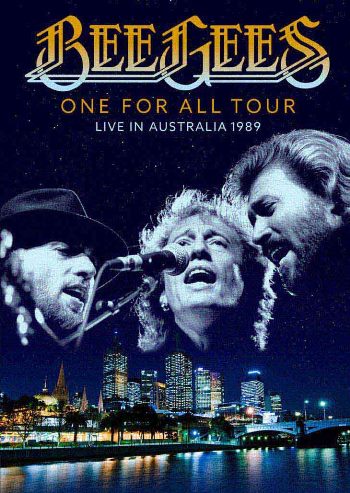 The Bee Gees were in kind of a weird place in 1989. About a quarter of a century into their musical career, they had a roller-coaster ride of ups and downs in the first 15 years of their musical voyage. They started as an Australian skiffle group, moved to London and became a purveyor of drop-dead gorgeous British Invasion balladry, and eventually became the biggest group on Earth when they started experimenting with dance music.

However, the 1980s were not kind to the band. The decade started with them on the top of the world – they scored six straight number one singles between 1977 and 1979 from the soundtrack to Saturday Night Fever and their album Spirits Having Flown. Then the ridiculous “disco sucks” movement hit. While the Bee Gees were not merely a disco band – as stated above, they were hitmakers for a decade before even dipping a toe into dance music – but their position as one of the main faces of Fever made them suddenly musical pariahs.

Suddenly, albums like Living Eyes and the soundtrack to the Fever sequel Staying Alive (for which the Bee Gees contributed five new songs) were tanking, with the first one not even going platinum. Singles like “He’s a Liar” and “The Woman in You” just barely scraped the top forty. Barry Gibb found success as a producer in the early 80s, helming music like Barbra Streisand’s “Guilty” (on which he was a duet partner), Dionne Warwick’s “Heartbreaker” and Kenny Rogers and Dolly Parton’s “Islands in the Stream.”

Solo albums by Barry Gibb and Robin Gibb in 1984 barely made a ripple, both spawning very minor hits: “Shine, Shine” by Barry and “Boys Do Fall in Love” by Robin. Their 1987 album E.S.P. returned them to the charts in Europe with the song “You Win Again,” which was a big hit across the pond, but still barely made a mark in the States.

It hit a point that Barry Gibb felt the need to disavow one of the band’s most iconic songs, telling Rolling Stone magazine in the late 80s, “We’d like to dress ‘Staying Alive’ up in a white suit and gold chains and set it on fire.”

1989 was the year that the Bee Gees were finally making their big comeback across the pond – what turned out to be their last comeback – and returned to the top ten in the US charts for the first time in about a decade with the title track of their album One. The vitriol and hatred for disco had waned, greatly because it had become a major building block in rap and hi-NRG dance music. Finally, the world was willing to whole-heartedly forgive the Bee Gees for their success.

So, there was a nice symmetry that this video captures the band returning home to their Australian roots – the Gibb brothers were born in England but moved to Australia as young boys and started their musical journey there – and returning once again as conquering heroes.

The show starts with a sweet version of the then-new song “Ordinary Lives” (as the One album was then current, the setlist is a little top heavy in songs from that album) and then takes a lively traipse through most of the different periods of the band’s career to that date. They even take a deep dive into their catalogue and dust off the band’s first Australian hit – the song that helped them make the move back to swinging London – “Spicks and Specks.”

The show really shifts into gear on the third song, in which the guys pull out their late 60s stunner “To Love Somebody,” which to this day – 50 years after it was a hit – still can raise chills. This starts a volley of classic ‘60s hits including “I Gotta Get a Message to You,” “Words,” “New York Mining Disaster 1941” and “Holiday” (with a nice version of the current single “One” fitting in the middle of the classics songs surprisingly well).

The 70s classic dance tunes start to show up then, with a gorgeous version of “Too Much Heaven.” After a nice, but inessential, medley of songs they wrote for other artists (“Heartbreaker” and “Islands in the Stream)” they go back into the early songbook with more heartbreakers like “Run to Me,” “Lonely Days” and the still superlative “How Do You Mend a Broken Heart?”

One particularly emotional moment in the concert is when the Gibbs dedicate the drop-dead-gorgeous Saturday Night Fever ballad “How Deep Is Your Love?” to their younger brother (and fellow pop star) Andy Gibb, who had died at age 30 the year before. Surprisingly, this is one of only two songs written for Fever that made the setlist (I guess they hadn’t completely come back to terms with those songs after the backlash, though later they do a lively version of “Staying Alive.” (Personally, given a choice, I would have preferred “Night Fever,” but it’s still a great song.)

The band does embrace its dance era as the show winds down, though, doing jumping versions of “Nights on Broadway,” “Jive Talkin’” and “You Should Be Dancing,” as well as a stomping version of the 1987 European comeback hit “You Win Again.”

The Bee Gees never really hit the chart heights of “One” again. They released four more respected but hit-free albums over the next 14 years, before Maurice unexpectedly died in early 2003. Barry and Robin feuded about the band’s legacy for years and were finally starting to work together again when Robin also died too young in 2012. However, over the years the Gibb Brothers’ reputation as one of the great singing/songwriting collectives of their generation has been restored. They are finally again recognized as one of the great groups of the last century.

Australian Tour 1989 shows the band in fine form, a group which had suffered slings and arrows and come out on the other side triumphant.