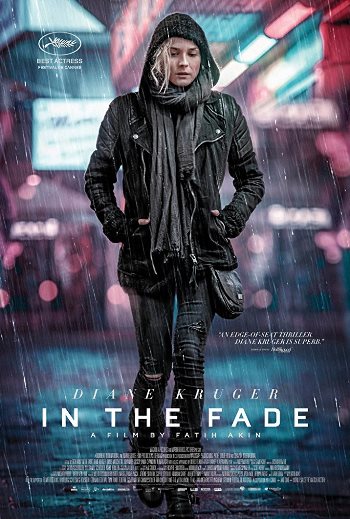 Diane Kruger never quite hit the heights of stardom which were expected a decade or so ago, when she played Helen of Troy and Nicolas Cage’s love interest in the popular National Treasure. However, even though she never quite fit into the Hollywood bombshell box, she has put together a steady and consistently interesting career, including a flashy supporting role in Quentin Tarantino’s Inglourious Basterds and the fascinating lead role of a emotionally-scarred homicide detective in the fantastic FX series The Bridge.

All of which led to this role, which won Kruger an award for Best Actress in last year’s Cannes Film Festival.

It was deserved. Kruger does a spectacular job – particularly impressive since this role is mostly performed in German. (In the last act of the film, her character goes “undercover” and speaks a decent amount of English.) The foreign tongue does come naturally, though. The actress, who has mostly performed in English in her career (though she has also done several French films over the years with and without her ex-husband Guillaume Canet), did grow up in Germany, before migrating as a teen, so obviously she is fluent in the language.

However, the performance in a second tongue is only part of the wonder of Kruger’s role. Kruger could have played this role without any dialogue – and in several wrenching scenes she basically does just that – and she would have still done one of the finest acting jobs of the year. (It’s a damned shame, a massive oversight that the performance was not nominated for an Oscar this year.)

Kruger plays Katja, a German wife and mother. One day, soon after she learns she is pregnant with a second child, her husband and son are killed by a terrorist bomb. The police are dragging their feet on the case – the late husband was Muslim, and the police think it may have been a hate crime, but he was also a reformed drug dealer. However, Katja is certain that it is a neo-Nazi couple who is responsible for the bombing.

As she wallows in her misery and the slow movement (and basic unfairness) of the path of Justice, she becomes cut off from the police, family and friends. She is all alone looking for righteousness, in a world where evil is not always punished.

In the Fade is a fictional story, but it is as real as the headlines.

It is also a film about bereavement, so it is only as good as its lead performance. And as was pointed out earlier, Kruger provides a performance for the ages.

In the Fade is a very dark movie. There is no forced happy ending, no completely moving on, no pulling oneself up by their bootstraps. In some ways it is a very harrowing film to experience, but it is also extremely touching. Don’t go if you need some light entertainment, however if you are ready for a dark night of the soul, In the Fade delivers.