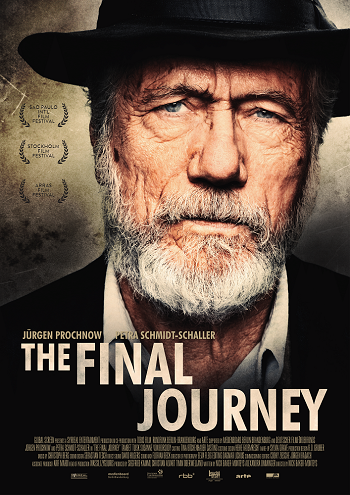 You know the old cliché: “You can pick your friends, but you can’t pick your family.”

The Final Journey is about one of these dysfunctional families, and about how a woman finally comes to understand a bit about her closed-off grandfather, and what forces have made him act as he does, towards the end of his life.

This understanding occurs on an unplanned journey into his past, a home he left behind long before the woman’s mother was even born, and a war of which he has never spoken.

The old man is Eduard Leander (Jürgen Prochnow of Das Boot). We meet him one day when he is sitting in his living room and realizes that his long-time wife Hilde is not merely taking a nap but has died. He is 92 years old and his daughter Uli (Suzanne von Borsody), who owns and runs a restaurant, thinks that she can’t care for him and they will have to put him in a home.

The granddaughter is Adele (Petra Schmidt-Schaller), a disaffected 30ish bartender who is somewhat estranged from her mother, and never felt that she knew the glowering, quiet Eduard. After an awkward funeral for her grandmother, in which Eduard cancelled the reception, Adele is pretty sure she will not be seeing much of the man again.

However, the next day, Eduard disappears from Uli’s German home. He leaves a note saying that he was returning to the Ukraine to try to find someone he knew back in World War II, which was about seventy years earlier. Uli begs Adele to run and pull him off of the train and bring him home. When she finally finds him, the old man refuses to leave. While she is trying to talk him into going, the train starts moving, and she is stuck taking at least part of the ride with him.

As she travels further with the old man, she slowly comes to know him in a way that she never really has before. This is partially good – she comes to realize she does have feelings for him and him for her. But she also learns more about his life that has always been shrouded in secrets, including the fact that he may very well have been a war criminal as a young soldier.

She also realizes that the person he was looking up was the woman who got away – an Ukrainian woman he loved long before he met her grandmother.

To complicate things more, this trip is happening in 2014, right as the Russian are taking over Crimea in the Ukraine, and political and personal tensions are all over. Adele does not have her passport, and neither of them know exactly where he is going.

Adele and Eduard meet Lew (Tambet Tuisk), a good-natured Ukrainian sharing their sleeping car, who agrees to help the pair track down the village that Eduard was stationed in during World War II. As they get to know each other, Lew and Adele start to give in to a mutual attraction.

Technically, it’s a simple road trip structure for the film, however The Final Journey also has lots of interesting and disturbing side trips. It tells the story of three small families in the face of much larger global considerations, both past and present.

The Final Journey is spectacularly acted – particularly by Prochnow and Schmidt-Schaller. It is a smart and heartfelt look at the ties that bind, even when we do not realize that they are there.